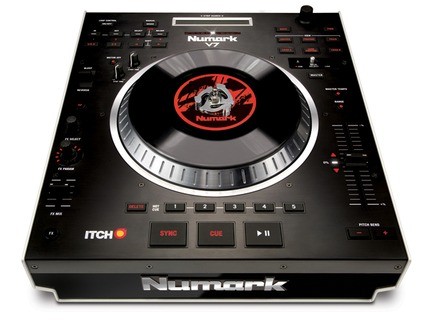 Numark announced that V7, its new motorized turntable software controller developed in patnership with Serato, is now in stores.

V7 is a single-platter digital DJ controller, based around the adjustable torque, motorized-platter design from Numark's NS7.

Features include real vinyl and a slipmat designed for precision control, effects controls, mouse-less library navigation, and Strip Search virtual-needle. V7’s link function is designed to enable DJs to combine one or two V7s with their mixer and their Mac or PC.

V7 contains the same effects as the NSFX. It includes a professional 24-bit audio interface that supports dual decks. It is outfitted with faders, knobs and buttons including controls for selecting tracks and blending audio effects in the included Serato ITCH software.

This motorized turntable controller employs technology used in the NS7, in which turntable and control information is exchanged at more than ten times standard MIDI resolution, according to the company. Because V7’s communication is based upon MIDI, it is MIDI compatible, and therefore DJs can use it with a variety of MIDI software.

Check out Numark for more.