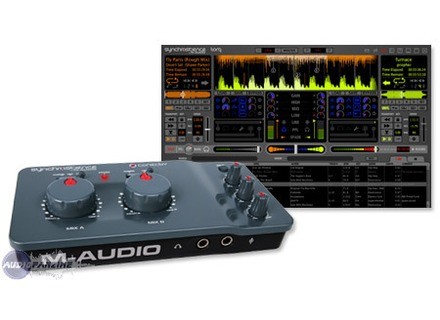 Torq Conectiv, DJ Package from M-Audio in the Torq series.

matthieu.tibi's review (This content has been automatically translated from French)

Exactly what I was looking for several months. All this looks very promising!

- No problem installation, no need to diploma engineer to install it.
- No incompatibilits note.
- A menu for rgler latency. That's all we need!
- The manual is very clear, it also helped me in my choice.

- This is where the first problems appear ... After some time (1 to 2 hours) Virtual DJ miserably plant (although I had no problems with my Hercules DJ Console) leaving me in the impossibility to play my productions. Also, I could not "complete the program," and so I had to stay with the program open, but without being able to plant restarting the computer because the signal of my two turntables vinyl records through the interface ( RIAA correction is done through this interface). So for my use, crash = cut its mandatory to rutiliser the correct interface.
- No update for the moment ...
- Virtual DJ 4.1 with Vynils timecods.
- 128 ms (the minimum possible with this interface)
------

- I am using Conectiv for several days.
- Both pramplis phono have motivated my choice. Unfortunately, their characteristics leave to be desired. After comparison with pramplis my table ECLER MAC40 two major differences emerged: the Conectiv out a pramplification RIAA signal after about 6 to 8 dB below the level measured with MAC40 and the definition in the bass frequencies is worse than the MAC40.
- I have not tried other interfaces being equivalent so I can not compare.
- At first glance, the report qualitprix seemed very attractive, but the instability of the driver and quality of pramplis phono make me rviser my opinion. The interface remains intressante for home use that does not ncessite an irreproachable stability and can also be used ASIO sound card for other applications.
- My use as very limited at the moment, I can not say if I would do this choice. New drivers would be welcome and I am currently working on another solution for pramplificaton RIAA.
Did you find this review helpful?yesno
»

spark972's review (This content has been automatically translated from French)

M-Audio Torq Conectiv
2
- How long have you use it?
1 week

- What is the particular feature you like best and least?
The +: The implementation ease effects
The -: The interface freezes and screaming, so I do not use with the database in full screen.

- How do you report qualitprix?
Given the benefits of the card, the margin is too wide for my taste ...

- - With the exprience, you do again this choice?
1.0 (cd July 2006) is abominable. Fortunately 1.0.2 maj makes things "normal" but feels soft still young, I think we should let the maturity and other maj.
Did you find this review helpful?yesno
»

vinchnyles's review (This content has been automatically translated from French)

M-Audio Torq Conectiv
4
- How long have you use it?

bin size, it is smaller than one might imagine in realitje find it quite more 'n play with windaube.donc no problem with the driver the only thing is that I have to unplug my card the m-audio fast track to start the AC logiciel..mais seem logical to me the pc would not manage 2 sound card !!! if both with regard to touch vinyl is like ... I wonder how it might be more realistic than AC and syncroscience software is pretty damn good especially visually.

Videment well for 250 euro there are only torq or mixvibes but I can not test mixvibes.

ca cartonne this setup !!!
Did you find this review helpful?yesno
»

Sylvain Ad cap's review (This content has been automatically translated from French)" problematic ..."

M-Audio Torq Conectiv
1
I have for some years, at first it worked, but it did not take long to messing around driver problems not stable it seems ...

When you test the 4 pc on different and the final four on messing it ends ... there is something to lose hope

I stopped using it, this sound card not reliable

When I bought Connectivity native sound card audio output 4 is after a few months, to choose I would have taken four audio without hesitation!

Did you find this review helpful?yesno
»
Read the 21 user reviews on the M-Audio Torq Conectiv »