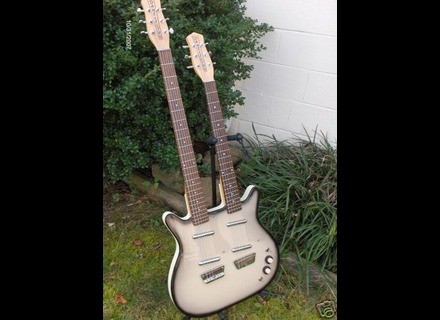 Danelectro Doubleneck Standard/Baritone Guitar
4
This is a double-guitar with a baritone guitar on top and a standard 6 string on the bottom neck. Each neck has two Danelectro "lipstick" pickups and there is a switch to change from one neck's pickups to the other's. There is a volume knob for each pickup, and on top of each knob is a control for tone for each pick up as well. There is also a three-way pickup selector, to change from the neck pickup to the bridge bickup, or to play with both simultaneously. Both the guitar and baritone necks can not be simultaneously selected.

Double-guitars by their very nature are more challenging to play due to the additional weight and the awkwardness of playing a guitar with multiple necks. That being said, Danelectro did a good job with the weight distribution of this guitar, and although it is not as easy to play as a standard "single-guitar," it is not that challenging, either. As with all double-guitars, it is difficult to play the highest frets due to the immense size of the guitar's body.

The lipstick pickups deliver a decent tone, but I always liked the way the baritone neck sounded over the standard guitar neck. This may be because I have no other baritone guitar to compare it to, but the baritone tone that is delivered is very rich.

I wouldn't bother with much distortion on the baritone neck, it would get way too muddy.

The standard guitar is a decent guitar, but not a great guitar.

Double-guitars look really cool, but when used live are seldom played for more than a single song. In spite of playing probably a couple hundred shows, this guitar has only ever made it onto the stage once. The only reason I've ever used it in the studio is because I don't own another baritone guitar.

I was lucky to get it for a steal for $99 at one of the Guitar Center sales events. There was a terrible snow storm that morning, so I'm sure somebody else would have snatched before me otherwise. Unfortunately, I didn't have enough money at the time to buy the matching case for $80, and by the time I had enough money the standard price was $150... costing me more than the guitar!

If you have written a song that calls for a quick switch over from a baritone guitar to a standard guitar, look no further than this double-neck!