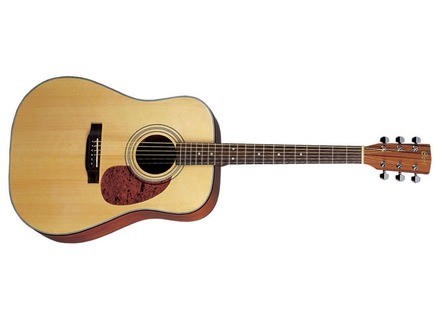 Vlec's review (This content has been automatically translated from French)

When I had that in AD 850 the hands, once arrived at my dealer, I immediately attacked directly.
And, frankly, it provides!
Well of course, at that price, we can expect something clean, but hey, as a member of the awkwardness is a bit hard to beat at low cost.
A few tests later, she appears quite pleasant to use, its a pretty hot, while keeping the set of strings of slamming metal. I also like the fact that the mediums are discreet and treble only appear if they are taken out ...
This little folk opens every style, and, to my amazement, I discover pieces of rock / hardcore / punk from another angle, and overall provides a pleasant sensation to the ear.
Light enough, it can be worn with a belt, although it seems to lose some teeth when playing standing up (or it comes from me). Beware, there is only one setting, which is thought to add an attachment at the connection between the handle and the body, or a lace head (I chose the second option).
Next game is pleasant enough, the stick was under control, the agreements are a simplicitée to press ... Also note the handle a little too thick, but puisqu'ayant large paws, this gene less ... A little less, too, is the lack of marks on the first five boxes, either the key or the slice.
Since it is a folk with no cutaway, we say goodbye to the last four boxes. Already the 15 and 16th case are difficult, but the others, do not think ...
In addition, the junction sleeve / case is quite broad, including gene just after the 12th fret over.
In short, in short, a good sound, not complicated to play and also, I forgot, a spacing between the strings very valuable despite wide handle unpleasant and boxes larger than a hollow body or solid body.

Honestly, I only gain this AD to serve as a replacement when my guitar Ibanez GRG 170 DXL let me go, or I leave my stuff in the rehearsal room.
But after a few hours of play, I got attached, and found quite a few genres sympatoche to play, which relax after phases of metal and punk.
Otherwise, its really round of AD 850 NS, hot and serious, it's really ... Pfiou!

I use it for three four months already, and I love everything about it! The only negative is the lack of markings in the first box.
I had not tried the other model, being left ...
Given the quality, it's well worth the trouble to pay € 170 / 180 ...
And with experience, of course I do it again this election!

Final note, I thank Cort for having reported that the table was spruce. I appreciate ...
Especially the beautiful autocolant on the tailpiece, which now gives me a wonderful job of glue that does not leave ...
Suddenly, a round dark wood the size of a piece of € 0.50 on a light wood tailpiece ...
Did you find this review helpful?yesno
»

Senco_one's review (This content has been automatically translated from French)

Cort AD850
4
Cort acoustic guitar NS 850 - AD.
For all CHARACTERISTICS prcises I can not really tell you more as a given that I beginners
The opening is against something enjoyable trs. Dress it does not stick to hands, which is quite apprciable.
Even in it, the guitar is well made.

- The handle is it enjoyable?
Yes, the handle is trs enjoyable play. Satin varnish does not stick her hand and makes the game I have small hands and I can not find it too big either.

- Access in acute (dernires freight) is it easy?
No ... the guitar does not pan shot of the handle and the heel rises high enough so that you can not really accder aigus.A to 12th from the cargo becomes a uncomplicated.

- Ergonomics is it good (in terms of shape, weight ...)?
I find it quite enjoyable. The box seems a bit much at times but the form gnrale is enjoyable and not too heavy. I mainly play sitting without any problem. To see him standing with a strap.

- Gets it easy to sound good? ...
I think yes. Compared to the guitars bought - a-friend-for-no-price of my knowledge it has a trs really good sound. Compare a 5000 guitar I could not tell you, I never think but many guitars compare prices first dfend it really well trs. The sound is warm and fairly round. All REPRESENTATIVES frquences are fairly well when we play, treble trs well emerge and come support mediums Submitted trs. The bass also suit me but some find it lacking a bit.

- Appropriate are your style of music?
I mainly play rhythm with (bah yes, it's hard arpges: D) and suits me perfectly. Level style, pop, r & b and soul a perfect fit. Friends also play the blues well trs. It is against trs net, so for fans of blues very dirty and a bit messy they can be missed.

- What are the sounds you prfrez, you dtest?
I love to scratch at the 12th fret in agreement. With the harmonic sound becomes incredibly round, warm, trs really enjoyable, the limit of the synthetic. It can also play closer to the bridge to sound more and more dry mtalliques but lacks a bit of volume.

- How long have you use it?
I use it for 7 / 8 months. Premire purchased as 135 guitar with bag, tuner, 3 mdiators (yes, for real) and a set of strings rab, it's really a good guitar for trs d beginners. It Vitera compltement the mistake of buying a guitar pourrave a friend and as a friend, I steal mine all the time because he fell in love.

- What is the particular feature you like best and least?
I love the satin finish that is enjoyable to touch trs (just with your hands well sr). The sound is also good for me trs.

- Have you tried many other models before acqurir?
When buying more than I fix a budget that quality guitar. Luckily I came across an excellent seller who has found the perfect balance. Otherwise, the tests I've done are on the guitars of my knowledge, this is really a good guitar trs.

- How do you report qualitprix?
This is an excellent quality price. 135 guitar, cover, mdiators, tuner, set of strings

- With the exprience, you do again this choice? ...
Absolutely! And all beginners guitar should do the same because it is well worth it! The IDE may be taking the same MODEL electro acoustic 30 more if you use this prvoyez scnes guitar / studio because, until that you are done for the kitty to buy a Fender it you just fine.
Did you find this review helpful?yesno
»

Kandoo's review (This content has been automatically translated from French)" Friendly!"

varnish very nice although a bit wide.
Guitar rather small but quite cumbersome.
Dreadnouthe guitar, not for access to acute, but usable until the 14th fret. Very nice

sonoritées, bluesy, with a sound that carries far! This guitar is a lot of noise, enough to play without a microphone on a small stage

A small detuning is heard quickly, but only a very good ear will notice!

I use this guitar for almost a year, she should quite it.
I tried other models, such as a very old Yamaha, and also Cort AD870.
For someone who started playing the guitar is an excellent choice!

Cort AD850 manuals and other files