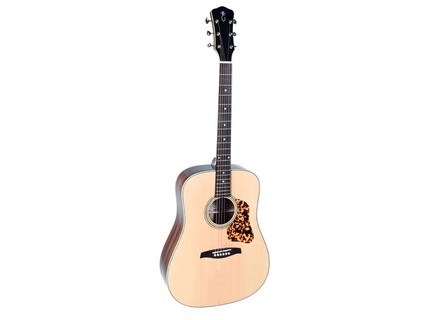 Pucelle_Dabidjan's review (This content has been automatically translated from French)" In-class of 1500 euros, an essential reference"

Levinson Garry LD-47
5
I do not know if I have already put this guitar in the right brand. Gary Levinson is indeed a brand maker, producing guitars in small quantities. To fix it all, I have not found a site on Gary Levinson. Perhaps it is a registered affiliate of Blade, I know. And there's only one "r" in Gary. But ... when we know we know.

The LD47 is downright shocking to see land. Good solid Indian Rosewood for the back and sides, ebony fingerboard beautiful, beautiful solid pine table, no smudges, nothing chiard, x reinforcements made goods as well (always look in acoustic, always). But no preamp and no chest hard. Thus, -2 points directly. But do not be fooled. In this price range (-2000 euros). It is one with the best. The difference you will see, will come earlier.

Oh yes, the handle was very nice, and this is a good instrument. Shrinking perfectly finished, no zinc plating, even in the most extreme positions. I have not looked if the guitar was balanced, I tend to throw myself on acoustic, in any case very slight.

But the grip of the handle was a real reference. Tested directly next to Furch, Taylor and Normann, the Gary Levinson has a handle moderately large, moderately thick, but that falls perfectly to hand and around which rotates without worry. It reminded me a little stick of white falcon gretsch (neither large nor end, nor big, but really effective). Comfort also in high positions of the handle. Easy hoop to the top of the handle.

I would still insist that it is simply left to play the 3000 ball to Taylor that the maker had put aside. I apologize for not having also noted the reference to that guitar.

It was close to the top. Compared to the Taylor was next. The Gary Levinson is clearer, but here we must understand "brighter". It is the rope that is not highlighted, but the air. All frequencies arrive with a little more air without losing significant ground. Compared with the cream of the cream of Martin, Levinson gives less grain. It has a grain a bit softer, which runs a bit higher in the medium without running out of race to attack. We can beat or caress her, she obeyed. It also does not cross the ropes when you attack, what I like personally very much.

As for power, we are in the right average dreadnought. It will be said diplomatically "it does not lack." It's not a large auditorium, either, but it is sending.

In fact, simply put, the LD-47 was on the verge of my references, the Martin HD-28 and the Guild JF-55. On a par with most of the cream of great folk guitars up to 3000 euros, but with a little more ease of play all at a very competitive price. This is the perfect guitar for the pro studio or its sub account for lovers looking for a good guitar that will not change often. Euros announced for 1460 is admirable and deserves here. Note excellence.

I found it in Krompholtz Musik in Bern. If you persist across zoning there, will definitely try this skyscraper.
Did you find this review helpful?yesno
»