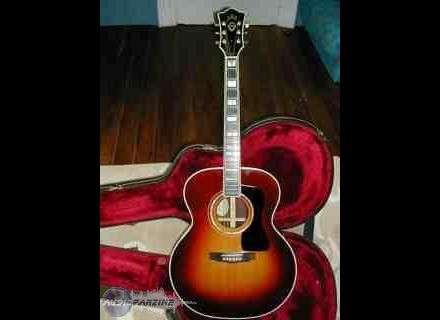 Guild JF 55
5
I had a little afraid to try a Jubo. I'm still terrified of it:


I saw in all my nightmares of children, half mice and half elephant, half bird. My brain did not accept the concept and I sometimes wake up screaming "NOooooooOOOONNN DUMBOOOOO NOT!

Guild JF55 by-cons, I accepted immediately. It is well finished, the wood is good, though not as visually stunning as the Lowden, but the grain of the rosewood is beautiful. The ebony button is selected. The body as the handle is painted the same way, although a little less slippery, but very useful when you have to hammer out agreements live in a smoking room and it transpires his Big Mac on it.

Special mention for the mechanical, precise, uncomplicated, not hard. All combined in a nut quality, and it gives an effective result.

Again, no pre-amp. To think that these guitars producing upscale believe we're all over-equipped and that will force land his own pre-amp, powered by our standards.

Good point: A safe is provided with
Bad point: This safe is not waterproof. I know him well, it's the same model as the White Falcon.

[8] Very nice as an instrument. Everything is well done, no false note, outside of the box.

It was my surprise. Here we got to get perfection. The notes can be activated with minimal force, as desired sounds are powerful or not, they sound better still, and the handle, rather broad and thick medium to fine, was exactly what I like guitar. I found even the eyes closed, my marks.

Last detail, ease of game action remains very good even up the neck, suggesting a very serious shaping the handle.

I can only point the finger at the large size of the instrument. The girl who came to buy a guitar at the same time as I could be completely hidden behind. Well as a shield, but must have the template to play with.

[10] The mix of ease, sensuality and efficiency is totally irresistible. This is a reference on the subject.

The sounds were beautiful. The sound is broad and thick contained what I would call nimble. The foundation is hot and from the medium are pivoted on a light and airy sound that will open far into the treble, with an iridescent sheen. The grain is very fluid and runs nicely in the midrange. Power is always important and you do not lose power when playing piano, though perfectly audible and transcribed, with the strength he has been assistant.

I focus deliberately on the dynamics, really excellent, which is probably part of what I've heard better on this type of guitars. Indeed, when we set up his power game, the sound goes with it without choking. We can find gradually, the end of the end of violence and the guitar always responds so nuanced that it sends, and if we decide to blow up an agreement with all the fury of the wrist, do not worry, it obeys like clockwork explosively with you. It's totally admirable.

[10] There is one in perfection in its purest form. Note ultra-rare acoustic, I must emphasize.

it is not often say this, but this guitar is a joy on all the items that make a good sound. Done well, it played easily and it sounds good. In addition, the look is nice too and comes with the trunk. How? 3490 CHF, nothing to fuck, the sound comes at a price, and, compared to age-old Martin and Taylor who blithely exceed 4,800 balls, I can say it is not even that expensive.