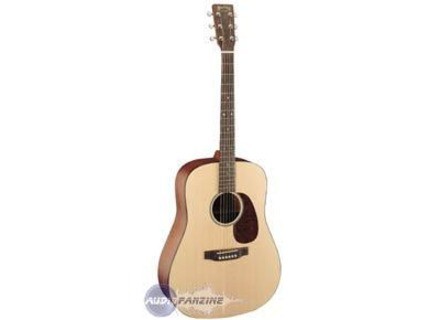 Martin & Co DM
5
My father brought me this new in 1998 after he asked me if i wanted a new guitar (he was living in Indiana at the time and i was in Barcelona) so of course i said yes. This guitar has been my main acoustic ever since sad they're not made anymore
Did you find this review helpful?yesno
»

Martin & Co DM
5
The Martin DM has all the features and characteristics of a mid-level guitar. This guitar has a solid spruce top, mahogany back/sides, and rosewood finger board. You would have to step up to a more expensive guitar if you want more exotic woods.

It did not come with an electric pick-up, so I had an under-saddle pick-up installed at a local shop. I actually prefer this over having a pick-up already installed because then the buyer has more options.

This guitar plays very smoothly. The neck is a comfortable size and length. There is not much else to compare on the standard dreadnought size guitars.

The guitar sounds great in a variety of playing styles. Strumming, finger-picking, and leads all sound good. My opinion is that other guitars in this price range sound great for strumming, but bad for finger-picking/leads or vice versa.

The advantage of buying a guitar in the mid- to high-level price range is that the sound of the guitar improves over the years because the woods age and set-in. I would definitely recommend this guitar for that reason over less expensive guitars.

If you take good care of this guitar (keep new strings on it, get it set-up a couple times a year), it will sound great for a long time. I purchased this guitar after I had been playing guitar for 5-6 years because I needed to step up to the intermediate level. At the time I remember thinking that I would need to purchase a more expensive guitar after I became a better player. I have been playing guitar for over 15 years, and even studied guitar in college, and I have never felt like this guitar should be replaced with something more expensive. Unless you are a touring/studio professional or have tons of money to spend, this guitar is more than adequate. I definitely give it my recommendation after having it for 10 years.

Martin & Co DM
5
bought my dm from jacksonville guitar in jacksonville ar. when i first picked it up and played i was in love .it stays in tune action is great .it was used but in excellent condition.payed 575.00 for it and caseoverall

i only wished i found it sooner

solid,hold the instrument in my hands no other feel and i have played alot of guitars

Martin & Co DM
2
When I purchased the guitar over the Internet, I broke the cardinal rule of guitar buying: play it before you buy it. But all the reviews, including those I found at the Music Gear Review site, said it had a great sound and great playability. And since I live overseas, I didn't have the opportunity to do a lot of comparative in-store shopping. So I plunked down my $550 and several days later it showed up in the mail.

It looks and smells nice,and the included hardshell case is a real bonus. The first and second strings have a nice ringing tone. It stays in tune for long periods of time.

Maybe I just got a lemon, but contrary to all the reviews I read, this guitar is not easy to play nor, except for the first and second strings, does it sound all that great. The action is too high for easy playability, and even when I bear down hard, the third and fourth strings sound deadened, i.e., you get more of a "plunk" than any real sustain, from the third fret all the way up to the twelfth. The fifth string just sounds out of tune sometimes, even when it's properly tuned. Believe it or not, it got considerably easier to play and sounded better when I left the strings on way beyond their normal time. I've since played a much cheaper Takamine and a slightly more expensive Guild, and both sounded great and were much easier to play. When I get back to the States, I'll take it to a luthier for adjustments. Not that I'm thrilled about having to spend a lot of extra money on a guitar that, by all accounts, should have been ready to play, but, hey, them's the breaks.

It appears to be solidly built.

It's not the worst guitar I've ever played, but I think you could spend less money and do better, or spend a little more money and do much better. Please don't make my mistake and just order a guitar over the Internet. Play before you buy.

This review was originally published on http://www.musicgearreview.com
Did you find this review helpful?yesno
»
Read the 14 user reviews on the Martin & Co DM »