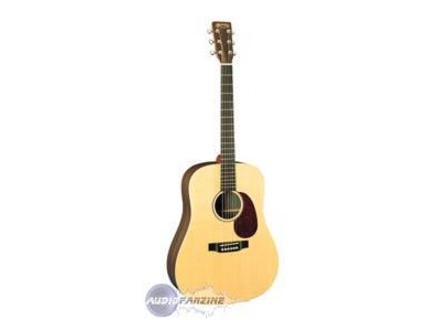 All user reviews for the Martin & Co DX-1R

Average Score:4.8( 4.8/5 based on 4 reviews )
Value For Money : Excellent
Not satisfied with those reviews?
Our members also liked:

Massive spruce top with a very nice satin finish (don't forget to dry the sweat of your hand after you play it!).

Laminated rosewood back and sides. It's not massive wood but it's very reliable and sturdy.

I'm used to electric guitars so in the beginning I found the neck slower than a Telecaster but I got used to it. Access to frets above the 15th is difficult. The "oval" neck is not too thick.

Good playability in dreadnought style, comfortable while sitting. When standing up the guitar is well balanced and not heavy.

The DX1R has a sleek look with no binding nor a rosette with pearly inlays, and the fingerboard doesn't have inlays, and that's what I love about it.

The guitar is great to play chords and do some finger-picking (for folk and even rock thanks to its high output level). It's not so good for blues unlike you use lighter strings.

I've been using it for over one year and I'm still very satisfied.

The action was a bit too high when I bought it but the key provided allowed me to adjust the truss rod and I found the perfect action after a couple of days!

The sound is wonderful considering the guitar's price. It sounds almost as good as guitars twice as expensive. I tested some other Martin, Breedlove and Taylor guitars and I find this guitar offered the best value for money.

At this price, I wouldn't hesitate to buy it again (and you also get a Martin case provided with the guitar).
Did you find this review helpful?yesno

Martin & Co DX-1R
5
My Martin DX-1R was made in the USA and has 21 frets and is not an electric-acoustic.

I have loved this guitar since the first time I played it...the neck is unfinished and goes so easy on the fingers, one of the nicest necks I have played and I couldn't believe it for the price. It is very light and is extremely easy to get a nice sound of. I would say the sound is definitely on the brighter, tinnier side, but it does have some nice bottom and fullness as well.

I'm a singer/songwriter and play a lot of shows by myself with this guitar and it always delivers, whether its with or without the external pick up I purchased. I'm into a lot of acoustic guitar orientated music (Bob Dylan, etc) and this has suited me great for playing those kinds of songs.

I've had this guitar for about a year and half now and I've been converted to a Martin lover. If I ever upgrade I will upgrade to a higher grade Martin guitar. I was looking at some Taylors and I decided to go with this one because it just played so nice and sounded so great for the price. I would hate to lose this guitar and I recommend it to anyone looking for mid-level priced guitar with great sound and feel. I would probably just purchase a higher end Martin guitar if I were to break of lose it.
Did you find this review helpful?yesno

Guillaume LANGEVIN's review (This content has been automatically translated from French)

Martin & Co DX-1R
5
Made in USA - Guitar input range at Martin, as Dreadnoughts, fourteen non-cash boxes, mahogany back and sides compressed, massive spruce top, black Micarta affects (but what the micarta?? )
There therefore a good and a bad point: a year round chipboard but a massive table, all with very little varnish, which has an advantage and a defect (see below). The guitar is an absolute sobriety, the mechanics are good and everything really inspires confidence.
Buying a box that is highly recommended.


The neck is very pleasant to the touch, fluidity foolproof as we will not look any further than an octave. The ergonomics of the instrument is good, it's a dreadnought so the box is impressive but the playability is there. As stated above, access to acute is not good, but this is not the purpose of this guitar. One detail that I enjoyed: the string action is low enough to plant.

Added 22/10/10: After verification, this Martin is larger than the average of the Dreadnought, the body is wider and imposing. This could lead some people but not me

Then, the sound, there's a lot to say:
It's a guitar "entry level", which is still € 700, it is therefore entitled to expect a certain quality. And the good news, we released a Martin guitar course "minimalist" because little varnished and supplied without case, but the savings are not realized in sound, quite the contrary.
Prime Agreement: ping, slap! Game to pick is just fabulous: the spectrum is apparent, it sparkles everywhere, the balance between bass, midrange and treble is impeccable, and it sounds Martin no doubt, it is far from the modern sounds of Takamine to 1000 € ( I do not criticize Takamine, it's just different). At the risk of attracting criticism: that Martin is his big sister to 1000 €, again the savings are paid on the finishes and fittings.
As for the game in hand, it is a treat, being played in slap or that touches the strings. You can really assayed the game, it sounds no matter what!
I really love the sound of the instrument, for me it's a skyscraper cowboy it is difficult to fault.

I owned an Art and Lutherie Cedar, an Art and Lutherie Ami and Cort electro, then I wanted to go up a notch and pay me a really good acoustics. This Martin is perfect, it's a real pleasure every time to play with. She is very polished, which has the disadvantage of being very fragile, hence the interest to pay for a good case. But the advantage is that the table will move faster than sound and should only improve further with time. In stores it was placed next to a Martin DXK2 (http://www.mguitar.com/guitars/choosing/guitars.php?p=z&g=h&m=DXK2AE) that costs € 669. Nothing to see, even if the wood used are not the same. The DX1R is much better, and value for money is terrible!

Most of Martin DX1R:
- The look, simple but elegant
- The ease of play
- Sound!!
- Value Price

The - the Martin DX1R:
- Frailty
- No pouch supplied

Added 22/10/10: After several weeks of heavy use (at least 2 hours per day), it is always as much a treat. I have since tried Patrick & Simon, Takamine, Godin and often more expensive, and I remain persuaded that Martin and good for its price range

to the top of the handle folk c cool even very good but that descent ...