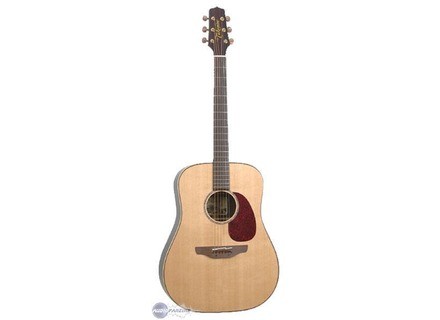 AN16, Dreadnought Steel String Guitar from Takamine in the Supernaturals series.

Takamine AN16
5
I played acoustic guitar as a teenager, and about a year and a half ago, after more than 40 years, bought an inexpensive old acoustic and started taking lessons. I had been looking around all the local sources for something better, and kept coming back to this one guitar . . .

The store had a half dozen Takamine guitars hanging in the display, and when I came back a couple of weeks later, only the one I liked best was left -- and the price tag had been reduced from $1299 to $999. The clerk told me they were discontinuing the brand at the store, and this was the last one so I played a while, pondered, bought it, and took it home.

The sound -- what else? And the action was set a little lower than the other brands, which makes those bar chords a little easier for a relative newbie, like me.

So far, I haven't found anything not to like.

I pick this instrument up a half dozen times a day and never get tired of it; it's a keeper!

The guitar is quite possibly one of the most beautiful i have ever seen. The back and sides are a beautiful, dark, indian rosewood, and the top is made out of spruce. It has an amazing low end sound, and amazing sustain and tone.

There really isnt anything to dislike about this guitar... really...

The guitar is handmade, and it is some of the highest quality wood around. the quality is perfectly amazing.


I could not be happier with another guitar. Takamine can hang with the best of them...

escaeric's review (This content has been automatically translated from French)

That's his strong point, with a spruce top exeptional sound quality and the extent of touching the guitar but like a martin is the ease with return, the balance is perfect accuracy is excellent amplitude and power are waiting vous.attention this guitar is very sensitive to the type of rope and although ella seems versatile enough to mount with the original game addario tupe bluesy do not put in value.
against by the arpeggios, picking, jazzy sounds make really great.
With phosphorus bronze strings Adams or Martin becomes almost perfect for blues and folk sounds.

I use it for 8 months now this is my 6th acoustic guitar in 24 years.
I appreciate the playability and versatility and purity of its sound.
in its price range price is no competitor in my opinion nothing to do with a year 10 and martin or taylor first prize! certainly it has a less affirms that an MA Martin D28 but it's so much easier to play and more nuanced.
The value for money is excellent.
I would do this chosen without contest and I would add that the Japanese became indisputably the masters of the quality in terms of instruments.