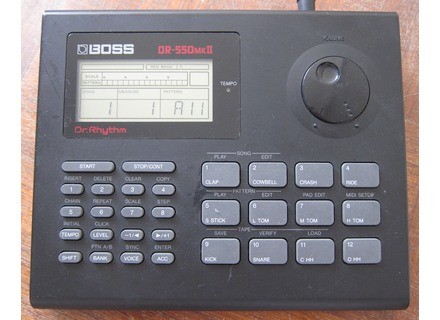 All user reviews for the Boss DR-550MKII Dr. Rhythm

Average Score:4.0( 4/5 based on 6 reviews )
Not satisfied with those reviews?
Our members also liked:

Boss DR-550MKII Dr. Rhythm
2
I was in the navy on a gulf tour in hong kong doing some window shopping when i ran across the doctor rhythm. I used it with headphones during the tour.
It has a nice sound,nice look. But i found it difficult to understand the break down of the song building concept. I purchased this unit for approximatly $300.00 in 1989.

I like the wieght,color,price and also the sound quality of this unit.It has a protability that suits people who are into mobile recording and that are limited by space.So i feel i like it for a beginner unit and can use it as a accompany piece in my home studio.

The unit is limited on midi hookups, and i find the unit a little difficult for a musician to steer through the menu options abd scale option are hard to understand. I wish it had more different sound. I wish i coulld store new rythms into the unit.

The unit is sturdy, I stored inside a navy bunk for days and it still worked greatly.It can withstand a little punishment ond hold up to a lot of tapping on the pads.

The boottom line is that the boss dr, rythm is a piece that is strong,light,portable,and affordable.It is limited and a little difficult to work for a beginner.I would say shop around and try to find a more user friendly piece.

CroMignon's review (This content has been automatically translated from French)

Setting a bit daunting at first. It deletes some good things at the outset by mishandling.
The manual is well done.

It is possible to really returned what you want (it takes time for cons).

The bass drums and tom are superb. The cymbals should be changed (for me).

Enchainent patterns without problems (no latency). It really gets what it wants and create piece remains very simple.

Most: the sounds (with a compressor / limiter is of thunder).
Minimum: access to different 'menus' which sometimes cause errors.

I do it again no problem this choice because it is a treat. Bought € 50

A single measure for patterns, but you can set the number of steps.

To copy the pattern is not intuitive: you must choose the destination and after the pattern you want to copy. I deleted some very good patterns trying to reverse, aprais I learned how.

That is very easy to use.

Sauvegardage by the audio track is quite fast (1 minute 14 seconds for all the patterns and the kit), and works well with a digital recorder.

Acoustic drum sounds: as good as some toms and bass drums are also used for electronic music.

TR-808 sounds: the sounds except claves, congas and cymbals, but these sounds are similar to sidestick, analog toms and hi-hat open, and it may be possible to simulate with editing.

I saw the beast described on pages in English as a drum machine industry, but if you do not use external effects it There's very few industrial sounds.

The problem is not the quality of sound, rather that there's no n-if a lot of sounds.

I use a few months.

If you want a hundred electronic sounds, functions as kits and roll is not for you. That is a very nice little boiboite.

This choice I would do again if it's cheap. 100 Euros is a bit too.

phger's review (This content has been automatically translated from French)

Boss DR-550MKII Dr. Rhythm
5
No effect, but I passed through my Virtualizer Pro is the most irrelevant.
Already without the effect is not bad.

Using ultra simple. In two minutes you can make very good pattern that sound still good.
The issue is simple. No menu or submenu. Direct access.
Truly the top.

Very very good sounds
I had a DR-66o there five years, with regret that I sold.
I bought a year ago, in a speed DR-3. I sold one month later (no, really bad).
I bought a DR-550 mkII in okaz for 75 euro. I really found the punch 660 and with more ease programming incredible but true.
This stuff is really cool, portable and small.
I will never sell it.

Djeeloo's review (This content has been automatically translated from French)

Boss DR-550MKII Dr. Rhythm
4
1 MIDI IN and that's enough. Two audio outputs (Left / Mono & Right Headset +)
91 Sounds Different. We can use 48 per song DIFFERENT (4 banks of 12) is enough.
But no effect of 'color' diffrent dbrayables and accents.

Squenceur trs simple but intuitive. Beginners and I top it is the basis of squence, but it is very well done and visually effective. Ample practice for the DR550. No need for manual squenceur.

For configuration gnrale, use combinations of keys, but everything is on the DR550 srigraphi, so not too worried.
Each sound has so many 'colors', ie more or less than a chorus or legalization diffrent, prdfinies and unchangeable. Also pan and focus, and a reserve of canal. For example, if you put the open and closed Charley on the same channel, the sound of Charley open cuts when we play the closed hi-hat which gives a little gaming ism
I never had the manual and needed ... No! ! !

One criticism that there have not SETTING THE by its volume.
Pilot matre by a keyboard, the mapping is a little bizzarre, only two banks are "entire", the other two are a bit scattered.
It just sounds CRER sets with identical colors and Accetta difrent for a game more practitioner.

The pattern mode is simple, and the same pattern s'enchanent without them click and no latency.
The four "Songs" is enchantment, so it's like having a trs long song full of variations.

Some snare drum sounds really terrible round of kicks goods, fine cymbals, claps are trs 'Imagination', the Latin sounds sound a bit too 'samples' but s'intgrent pretty well. For other sounds, it's pretty good overall.
Most are quite practitioner.
So there is no effect. It is used as a battery box in complment.
I dj alone (on my first songs, guitar + bass + vocals + synth + DR550MKII) and, in retrospect, the rhythm parts sound really good.

I have been using my 'beginners' less it is true, but I think that I spare.
The squenceur is very well, either as a block-note, like 'machine loops' Live in, or as supplment rhythm in a song.

100/120 Euros to rev it a good thing to have, but be careful to have the original power supply, or if it is necessary to avoid a power supply specially for a hum dsagrable (seek advice from a real seller).

I use other sounds to the battery (JV1010, Samper, GigaSudio, ral sounds - yes-) but still serves DR550MKII.

I think I would do this choice, not least for certain sounds.

FredT's review (This content has been automatically translated from French)

Boss DR-550MKII Dr. Rhythm
3
This little box has a single rate between MIDI and no output, which limits its use a lot.
It has 91 sounds and offers 12 voices of polyphony, which can cover some prs all uses and styles.

The edition is basic and sound is through the LCD screen. There is not much utility sr edition ... this would require at least one MIDI OUT port!

No effects, however, and squenceur Reduces its simplest form.

Last point: The Backup / Restore give is through a mini-jack on one magntophone. It is a relatively old design, fine, but it's even a little archaque! Reminds me of my first Amstrad!

The configuration is very simple, the manual n'tant really necessary for the functions evolve.

The edition of the sounds is easy since basic ...

Note finally that the configuration is saved with the batteries installed, even if it is supplied by an external transformer. This is quite annoying especially given the Systm give backup!

The sounds on offer cover a wide range of styles (from pop to jazz to dance).
The only regret for opportunities rather limited edition and too few variations within a style.

Toffe to purchase drum kits of an expander Korg, I did not much use since I am quickly pass a rhythm box VSTi virtual, with virtually endless possibilities on which I reprogrammed the sounds of the samples have the DR550 APRS!

Reserved A, I think, small configs that will mostly be using MIDI or standalone squenceur through the house.

The weakest point is rvle finally be the lack of MIDI OUT prohibiting its configuration from the PC and the use of pads during the registration of a squence.