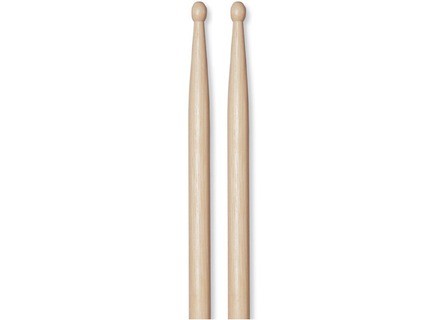 Vic Firth American Classic Hickory Rock
2
Overall, I was not impressed with the Vic Firth “Rock” stick. I picked it up when I was younger for the purpose that Vic Firth wanted me to, it said “Rock”. Really, I feel that they’re just selling the name. It wasn’t a totally bad stick because like everything, it has it pros and it’s cons. I’m willing to share all.

I’ll start off with the pros of the Vic Firth “Rock” stick. When I first got them, the first thing that I noticed was the tip, of the stick. It was Vic Firth’s “bead” style tip. Different than the typical Vic Firth 5A or 5B, the tip was more of an oval shape, getting even tones out of anywhere you hit with it. Also, being that it was an oval, it would get great response and rebound. Very “tight” and sharp attack that enables you to get very fast and crisp double stroke rolls. The last thing that I really liked about this stick was the fact that it was made from hickory. It is a very strong stick, which in the long run, is really what you’re looking for.

Now on to the cons of this stick. From experience, these sticks are way too heavy to play anything with any style. And yes, they are just meant for “Rock” but still, they could be a little bit more versatile. The next thing that I didn’t like was the very short “neck”. What the neck of the stick is, is the length of where it starts to get thinner at the top of the stick. I don’t know why they did it, but it’s just about the shortest neck that I have ever seen on a stick. Having a short neck makes it a little harder to get up to faster speeds because the natural rebound of the stick is being messed with.
Did you find this review helpful?yesno
»