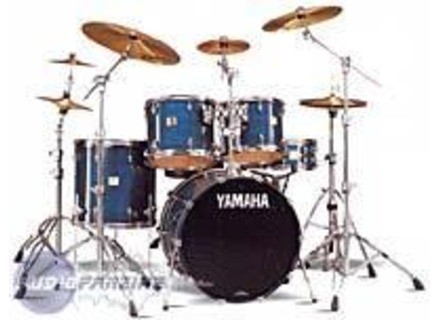 Yamaha Maple Custom Absolute
5
I am 54 years old, and have been playing trap set, mainly as a hobby, but also as a freelance musician since high school. My first "real" drumset was a set of Rogers drums that I bought in 1979, which never really gave me the sound that I was after. I tend more towards jazz, and by that time CBS/Rogers was rock focused. I have since bought Yamaha Stage Customs and individual Rodgers drums from the '60s of of Ebay, rewrapping most, which I have fashioned into a set.

With the purchase and rewrapping of the Ebay drums, I had really fulfilled my goal of having a smaller Jazz set, so I was not in the market. However, at PASIC approximately one month ago, I was "auditioning" ride cymbals from the different manufacturers. At the Paiste booth, I sat at this small set without paying attention to what they were and started playing the cymbals. While playing around the set, I noticed how musical the toms were(8X12, 14X14), how crisp the snare and how punchy the 18" bass drum. When I realized that they were Maple Custom Absolutes, I was in love. The drum shop, Columbus Percussion, gave me what I consider a good deal on the set; $1900.00 (drums and tom mount), taxes and shipping included.

What I like about the unit besides the known Yamaha quality is the sound that I can get from the drums; round, warm sound from the toms and a beautifully defined punch from the 18" bass drum. The snare sounds so much better than the one that came as a part of the Stage Custom set that it's hard to believe that they were manufactured by the same company.

Its hard to come up with what I don't like about the set, except that I have not yet been able to tune the 14" tom just like I want it. I think that is more of reflection on my tuning abilities than the drum's potential.

Great quality from the finish to all functional parts.

I played my first Jazz gig with these drums (and the Sabian HHX Evolutions, also from PASIC) one week ago. I loved every minute of it. I do believe that the sound of the drums actually helped me play better. I look forward to many years of joy from playing this set.

Yamaha Maple Custom Absolute
5
I bought this kit at mars music during their going-out-of-business sale. It's fusion sizes (10, 12, 14, 22, 14x5.5) and was way marked down-i got it for about $1300. I was looking for a good intermediate kit to move up to-like a stage custom or an export, but i found this for only a few hundred dollars more and it was definitely worth it. I also wanted it because of the maple custom reputation, and because a lot of my favorite drummers play yamaha.

I tried this kit out at the store with a pair of timbale sticks-the only sticks left in the store- and loved the sound, especially the snare. When i finally got home and played it more, it sounded even better. The toms cut through so well, yet were still so warm and musical. They sound just as good laying into them really hard in rock music as they do playing very lightly or with brushes. The bass drum makes a deep, dense, huge sound that you can feel through my entire house, and the snare has a lot of warmth and crack to it as well. The sea blue maple finish is very nice, looking darker from a distance and shiny up close.

I have few complaints, if any. The YESS system lets the 14" tom wobble just a bit when hit really hard, but that's not a very big issue and is common with big mounted toms. But I really have nothing to complain about overall.

The drums are of the highest quality and i have had no problems regarding construction and quality. The finish is durable and i've had no scratches or other damage to speak of, although i do take good care of these drums. the bearing edges are smoother than possibly any other drum i've seen.

Overall an excellent drumset. Comparable to any other drumset on the market, although some people say that DW, pearl, etc. are better, but i really think that drums are ultimately just a personal preference, especially when comparing top-model kits. To be honest, i definitely prefer the yamaha to the one DW kit i've played and the pearl masters i heard a guy playing, but i'm just as biased as anyone else. but it's definitely worth getting a high quality drumset if you can afford it or find it on sale for cheap enough.

Yamaha Maple Custom Absolute
5
Ordered this fantastic drumset from www.drummusic.com, since I live in Malaysia, I had to make a cash transfer of USD$1498 to their bank account in Belgium. It took 2-3 weeks to get to my doorstep and it arrived in 2 big boxes, in perfect condition. I bought this drumset mainly because of recommendation and personal interest in it.

Looks - The Plum Maple Lacquer, well done, very consistent and looks like black from a distance.
Bass Drum - The bass drum sounds boomy and has good resonance despite having little attention on tuning it properly. I cut a 7" hole in the center of the bass drum using the Remo Dynamo that was supplied and it was less boomy.The Powerstroke 3 that came with the bass drum suits it perfectly.
Toms - The set came with a 12",13" and 16" floor tom. The included Clear Remo Ambassadors gave the toms brightness and good projection.I changed the head on the 16" to a Clear Remo Pinstripe to suit my taste.
Tom Holder - SOLID, very adjustable, the clamps hold on super tight. Besides, it better hold on tight 'cause I don't want to damage the beautiful finish.

Nothing much...except that they were quite hard to tune with the Remo Ambassadors supplied.

Construction is flawless, each lug only has 1 screw attached to the shell, unlike conventional drumsets which have 2 screws. The bass drum hoop claws didn't have any rubber padding on them but that isn't really a problem.Every hardware on board never came loose at all the whole 2 months ever since I had it.


Excellent set, I would recommend it to anyone looking for a top quality professional maple set. Now I can show off to my friends =)

Yamaha Maple Custom Absolute
5
The Yamaha Maple Custom Absolute is an awesome drum set designed for uses of all types. A studio session drummer recently brought this kit into the studio where I work on a session that I was doing where we tracked eight songs of drums in one day! It didn't take too long to get some great sounding drums, as these drums sounded awesome right from the start. He had the 6 piece version of the kit, and I would imagine that they come in a few different configurations. Like the name states, these drums are all made from maple wood and are as sturdy as they come. You can also get the Custom Absolute kit in other materials, or even mix and match different woods if you want. I'm not a drummer, but I've recorded enough drum sets to know which sound good and which don't, and this one certainly sounds great! It's definitely a professional's drum set, so I'd only consider it if you're recording and/or gigging a lot and have a good amount of money to drop on a top of the line kit. The overall sound of these drums is deep and full, with the snare being punchy and bright. You can get different sized toms I'm sure, but the rack toms that he had were 10" and 12" I believe. The Yamaha Maple Custom Absolute is really the perfect all around drum set for recording, as it can cater to recording different types of music for sure and isn't specified toward one style. Yamaha in general makes some of the best, and most affordable drum sets around. Whether you're a professional or a beginner, they've got something for you. If you're in the market for a great drum set, definitely consider the Yamaha Maple Custom Absolute kit.

Did you find this review helpful?yesno
»
Read the 5 user reviews on the Yamaha Maple Custom Absolute »