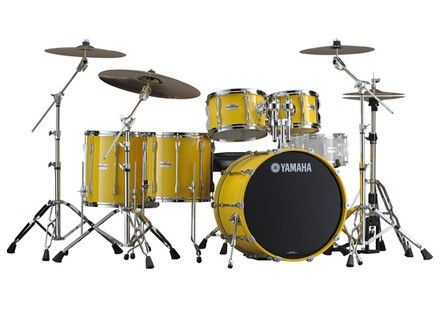 Yamaha Recording Custom
5
Full blown set used with a few stands, cymbals, and some e-drums stuff for $2200. Had to ship from Ohio to West Coast to get it.

They say these are the most recorded drums in history & I know why. Before I bought them, I hit a local Guitar Center & tried the current selection of DW's, etc. While I was there I sat on Yamaha's latest top-of-the-line birch set. It felt like home right away. While I was there, a guy came hrough who had been playing for so 40+ years. He tried everything in the store. I got up from the birch kit & told him to give them a try. He didn't want to get off either.

They say drums "age" into their tone as the wood grows older. So I elected the predecessors of the current Yamaha birch setup & have no regrets.

Sidebar: I ran into David Garabaldi at a drum clinic after watching him play a set of RC's with TOP. Asked him why he was not playing the newer set. His response )paraphrased) was: I have a lot of different Yamaha kits. To make this gig I had to pull these out of storage. I forgot how good they are. In fact, these may be my favorite drums, even better than my new ones. Drums seem to age, and these have aged well.

His set was an anniversary set of RC's.

Ten on a ten scale. Really, when you get to this level, how can you go wrong.

I would HIGHLY recommend a set of Yamaha Recording Customs to anyone. Yeah, I know, they do not have all the "coolness" of the current DW's, and certainly their classic cherry wine & black colors seem boring compared to what DW & Pearl put out (of even some of Yamahas new stuff). Then again, you get the most recorded drums in history, top quality, and a nice looking set. Steve Gadd played these for years, along with Dave Weckl, Garibaldi, and many others. I don't usually buy into endorsements, but having owned a set, I also know they didnt just do it for the money.

Drum 001's review (This content has been automatically translated from French)" THE TOP IS RECORDING CUSTOM!!"

Yamaha Recording Custom
I use it for 3 years I used to buy drums one by one on EBAY, and Audiofanzine ZIKINF
I had one before PEARL MMX MAPLE
A REMO Mastertouch
A SONOR FORCE 3000
What I like most is the sound!! even with white skin!!
a true personality, but after the game especially the drummer on that TOMS are a crazy facilitates tuning
I also love their vintage elegance without the RIMS and of course the super tie tom
absolutely perfect!
what I like least? the price!! because I board not afford dem buy a new one!
or if another fault not enough color choices but this is really minor!
I remake that choice without hesitation and even if I had the euros to buy another drumkit more upscale I think I will take the same new
I think I prefer the birch toms, we pan to the batteries but maple birch high end is very good too

Pete_shifter's review (This content has been automatically translated from French)

Yamaha Recording Custom
4
This is certainly the most widely used drumkit in the studio. The sound is very controlled. It's clean. To each to see if this feature suits because of the coup, it lacks a little personality.
The volume is very clear he also controlled. This explains its popularity in the studio. Attention to those who have a very powerful snare drum configuration for caf-conc ', the balance of the instrument might seem pretty lame.
The highlight is the ease of adjustment. No need to spend hours to control troublesome harmonics.
When the style of music you can play with, rock, funk, variety, etc.. Maybe not enough to warm overtones of jazz and not enough projection of rock "bad". Anyway, you can always cheat a little by choosing out his skin.
Personally, for the rock at that price (about 2000 euros), I would go see Pearl in which the big banks in hell or Tama drums which have a projection at the top.
Did you find this review helpful?yesno
»

nico.charbo1's review (This content has been automatically translated from French)