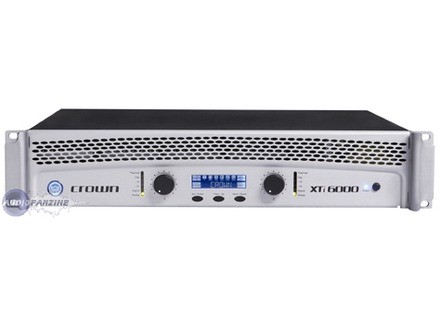 XTi 6000, Dual-Channel Power Amp from Crown in the XTi series.

Product replaced by the Crown XTi 6002.

manudox's review (This content has been automatically translated from French)" The power is there, the power handling to see ..."

Crown XTi 6000
4
This review complements the JBL PRX635 I use together.

Unpacking the carton. I connect, I call pushing the parameters to my subs JBL SRX718S, I have a little trouble with only 3 buttons. It's less intuitive than on Driverack and other BSS. I decided to connect the PC via USB for configuration.

After research, I am disappointed by the fact that we can not say that the parallel output of the amplifier is filtered through low to attack satellites.

I had my back rack with driverack to filter satellites.C is stupid I'm running a processor that has 6 outputs with high pass ... Brief.

I am looking for settings for boxes in the library, can not find the presets for srx718s, it is always associated with the satellite channel at low channel B satellite. I then load those of VRX918S since it is the same case, the same HP but the attachment points in +.

I balance the amplifier, the limiter balance and go.

More fishing biensur with the PRX635 3-Way, we are then amplified Quad, I cut a 85Hz, the slope on the amp is 48db/octave.

It goes down very low, it grows well, the sound is rather round and shook the pants, not a sub-impact SRX.

During testing, the limiting amplifier was-6dB, I never saw the light turn-10db on the receiver. To reach-20db output was already level, this amp really underfoot in power.

Attention to food, the 1700W has given PRX are absorbed, the XTI has 1800W, as they are switching power supplies provide the margin on food, I was able to trigger the power so mute, I 3 devices on the strip.

I still have doubts about keeping the amp outdoors in summer, when tested in a cellar at 18 degrees, the fan mounts have a little plan, it is controlled by the amp up and down constant speed. The amp is filled radiators, D oblige!

A powerful and ultimately made clear, what I was looking for.
A similar system then in Nexo LS600 2PS10 R2 2 boxes and an amp NXAMP 4x1 is almost 2 times more expensive!

Crown XTi 6000 manuals and other files