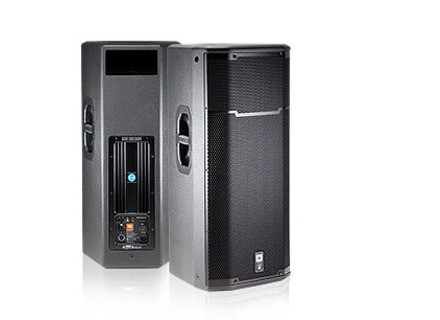 JBL PRX635
5
In over 20 years of being a DJ I have never had speakers so awesome! We now have two sets of JBL PRX635’s and are planning on two more. We have been playing with these speakers for the past four months and this is what we have learned, Tight and punchy are perfect adjectives for these speakers. You will not get that throaty mellow sound you get from some companies so it is a different world if you’re going to switch from someone like B52 to JBL. Reasons we switched to this speaker:

1) 3 way speaker that is pole mountable. You used to have to get a tall floor speaker and then try and drive the sound through the crowd. Now you’re flying high and that makes it easier for announcements and getting sound to the back of a room. 2) Self powered means if I ever blow one amp I always can finish the night with one speaker. Redundancy is key! Oh and they do run hot and that’s normal. If the box was open it would change your sound. 3) Lightweight and easy to move. 4) Daisy chain. If I have a large venue I don’t have to try and add amps all I have to do is out one JBL and into the next JBL. My rack never has to change! 5) Mic input as well as line input on the speaker allows me to grab just a mic and a speaker for times when all a customer wants is speech or vocals. 6) Simple controls on the back of the speaker means my DJ’s are less likely to screw something up at a show. We also combined the PRX speakers with a DBX drive rack. They do sound better with, than without, and the drive rack has your limiter, compressor, pink noise filter, EQ and sub harmonics. I would look into that if you’re running active speakers.

manudox's review (This content has been automatically translated from French)" Excellent value for money, to see the use ..."

JBL PRX635
4
First return after the start of my new PRX635 received in late November.

Already attention to two selection buttons equalization and sensitivity, we find ourselves in position quickly microphone instead of line. There are only two XLR input and output in parallel. I dare say Enough!

The first observation is, wow bass response and it grows very strong. In boost mode was really the feeling of having a cabinet with 15 "even on a tripod, but good thinking, logic, since the compound is tri-amplified.

The vent leads to the upper back which can cause ear fatigue when you bump just behind the facade. Actually benefits after the first anniversary, the speaker placement is to look at there 2 times on pain of having a lot of noise in the rear.

At very low volume, the medium seems a little absent, but "wakes up" when you go up a little volume.

Talking about the rest of the spectrum.
The color of the sound is very different from Nexo PS10 + box 15 "that I use next.

The medium does not sound at all like the treble is more forward, it is confusing to me who uses a lot of Nexo and tends to always fall between 800 Hz and 2.5 kHz while the medium is there mild I tended to rather these frequencies to get my balance.

Acute compression grows very strong, very prominent compared to Nexo or the medium is characteristic that stands out most.

She is at home anywhere on recent titles, the acute attacks a bit, but it corrects itself, it also comes from the fact that I was in boost mode so the treble a bit stressed, but the bass is more beautiful in fullrange.
The horns are set, the battery spring toms are pretty good, I like the color on his foo.

Fisheries, the margin, then I say that for all I've done weddings in 2010 I greatly under the foot for a gauge of 100 people.

At first I thought was short with only two boxes, I think that within this will be good! Outside I think we should allow 4 boxes or 2x18 "per side, a minimum in view of the overall performance of the satellites.

We will use, but for all benefits within the DJing style and the rooms average, 3000W RMS sort this pair amplified more than enough. The 3-way is for something and aesthetically, a tripod, throw the speakers, I find it much nicer than the FCR series ART7 I find particularly ugly!