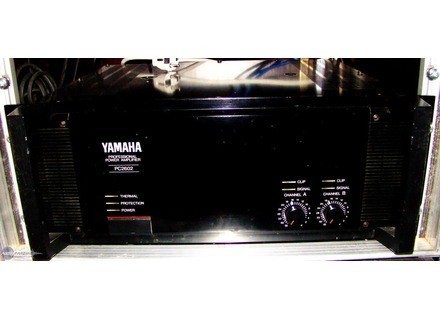 voicetrack's review (This content has been automatically translated from French)" Very pleasant surprise! ! !"

I use it for a few weeks. Purchased for the sound system. Mine does not ring transformer unlike the previous opinion ... The amp is well designed, the fan is noisy can ... The beast weighs very heavy (25kg to can close a (true) 2x260w/8h). Printed circuit boards are epoxy as often elsewhere on the Yamaha this time, but the construction is good earlier.

Good buy for the sound, I have not used the amp in its last entrenchment (no need for now) BUT, I plugged curiosity instead of my stereo amp (A Rega so far from what is worse) on JBL L26 (with hp original alnico so ...

) and where I was expecting a sound one can approximate lasts this amp so low, and although the opposite! ! ! Its a super precise, very clear, very dynamic and enjoyable! ! ! So I re compared with other stereo amps (old pioneer, Scott, etc ... and nothing to do, just in stereo, it sounds better than most of the amps I've tested up Now!

It remains to be seen at full power but gives a really good surprise then! ! !

anim action's review (This content has been automatically translated from French)

Yamaha pc2602
5
Amp sonore.sa high quality power and its dynamics even used to its maximum capacity is a reliable amp does not heat at all épreuves.il pas.son weight, a little heavy, is mainly due to its power transformer ring is oversize, but it brings its regularity.
I use it for 7 years not a failure. Contrary to the seniority to drive an amp is a guarantee of qualité.avec power of 2 * 400 watts it is usable in many different configurations.
In summary the acquisition of a device like this gives you full satisfaction and security
Did you find this review helpful?yesno
»