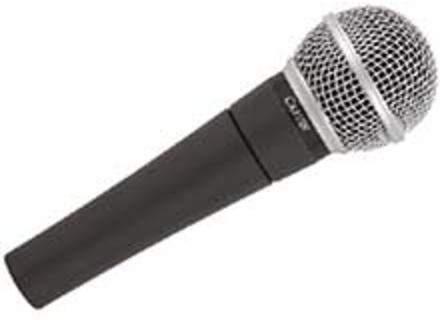 Carvin CM 68
4
The Carvin CM68 is a dynamic handheld-style microphone that is similar to a Shure SM58. It has a built in windscreen, and it is made for live vocals on stages. It is a standard directional dynamic microphone, with an xlr connector on the bottom. It is black, and it feels relatively heavy and solid. The windscreen does unscrew, revealing the directional dynamic microphone underneath. The black band that labels the microphone ("Carvin" and "CM68") is also removable when the wind screen it disassembled, which is a bit odd; that would make it easy to switch out the label, and convince someone it's a different microphone. There are plenty of microphone fakes out there, specifically the Shure SM57 and Shure SM58, so it is odd to see a different level of security of branding here.

I've used this microphone for all sorts of different purposes beyond the vocal mic usages. At practice, I commonly use it inside of a kick drum, so it's easier to hear my drum player's kick drum notes. His bass drum is made for the studio, with a lot of padding inside, so it doesn't project sound as well as it could, particularly for practices. This cheap mic fixes that problem easily, and it sounds fine for that application. Just don't expect the tone to be recordable or anything, but it is clear and noiseless.

For vocals, this microphone is mediocre, with a sound quality that is a little worse than the standard Shure SM58. It isn't noisy, and it doesn't seem to have any feedback problems, which is nice. But certainly, it's nowhere near my current vocal mic, an Audix OM7, which blows all other vocal mics out of the water, as far as I'm concerned.

But overall, this is a useful, and cheap microphone, if you happen to get your hands on one of these models. Check it out!
Did you find this review helpful?yesno
»