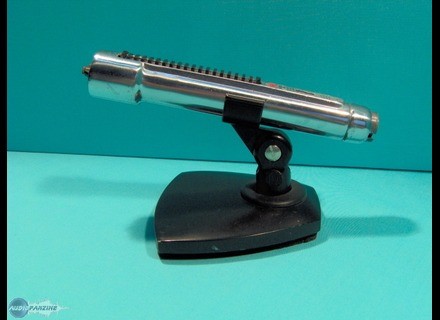 All user reviews for the Electro-Voice 676

An Electro Voice EV-676 chrome, one of five used by Jim Morrison and Ray Manzarek during live shows, rehearsals and TV show appearances by The Doors.
Jim Morrison can be seen using an EV-676 chrome microphone in several video performances and many pictures.

The silver EV-676s were then used by Ray Manzarek and also as drum microphones. They were used until January 1972 in Palm Springs, and officially retired from the band’s gear list in March 1972.

When Treanor became the band’s equipment chief in January 1968, he replaced the Shure microphones previously used by the band and for a short time Morrison used a chrome EV-676, but soon changed for a golden model, which would become his primary microphone for stage purpose.

Many pictures show that Morrison continued to use the chrome EV 676 occasionally during rehearsals (recording mics being too delicate to hold), TV shows and occasionally live shows. It’s probable that each of the chroms EVs that Treanor bought was used by Morrison and Manzarek at a certain moment as vocal microphone.

Treanor was hires as a consultant for Oliver Stone’s movie "The Doors", and he lent some microphones and stands which had actually been used by the Doors for the shooting. He has lived in South-Eastern Asia for many years, but the gear was kept in Los Angeles. When it all was subsequently moved, the chrome EV-676 microphones were among his other possessions and sold at Recordmecca.