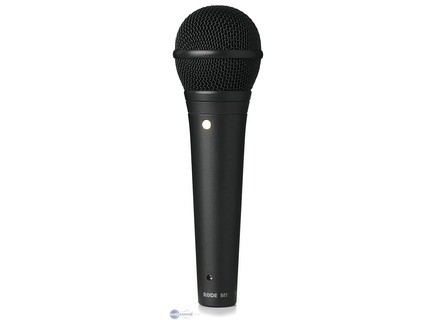 All user reviews for the RODE M1

Average Score:4.8( 4.8/5 based on 5 reviews )
Value For Money : Excellent
Buy this productView price information >
Not satisfied with those reviews?
Our members also liked:
Buy at Sweetwater

RODE M1
5
The M1 is a great and sturdy dynamic mic that is good for multiple applications. It is about the same size as an SM57 except it has a larger diaphragm with a round metal mesh casing. I used to play drums, but not so much now that i've started engineering the last 3 years.

I got the mic at guitar center. I went there not knowing what mic i was going to buy, but i knew that i didn't want to spend a lot of money. I was looking at what they had and i saw the Rode M1. I had never used this mic, but i had used other Rode microphones before and really liked the results I got. It only cost around $150 and it was definitely worth it. It also comes in a cool metal container.

There is a lot to like about this mic, it sounds great on a lot of things. It is great for recording acoustic guitar, it picks up a very full range of frequencies and sounds very full. It is also great for vocals. I've used it for vocals live, and for recording voice overs and it sounded very good on both, since it has a nice low end to it. I've also used it for an inside kick drum mic and it sounded good on that. I'm sure there are many other things that it sounds good on too.

There is really nothing I don't like about the Rode M1.

This mic is a very well put together. It has a nice weight to it and feels like it could take a dropping or two. It has a very dark gray finish to it, almost black. It has a pretty large metal mesh ball for the top that houses the diaphragm. When holding and using it, you would think that it costs more than it does.

Overall this is a great microphone. I recommend it to anyone who is looking for a dynamic mic to add to there arsenal, and doesn't want to spend a lot of money.

This review was originally published on http://www.musicgearreview.com
Buy at Sweetwater
Did you find this review helpful?yesno

bernard 71's review (This content has been automatically translated from French)" neutral micro, very robust, very good to me"

SM 58 is a good reference but something else there now and cheaper, this one by exemple.pas handling noise, breathing strength grade 8

lololuppin's review (This content has been automatically translated from French)" Excellent"

RODE M1
5
Dynamic vocal microphone that is super easy to use, it sounds very soft and precise, excellent midrange and excellent treble, the bass is very nice, a very good alternative to the actual standard mics, very good resistance to feedback and something very important: this mic, as well as the supplied accessories (clamp and storage bag), are of impressive quality and will rest long time.

I use it only for singing and for that, it's an excellent choice.

Buy it without hesitation, plus, for the money, it offers an unbeatable performance, at least for me.

I tried a bit of everything you can do with a vocal mic and it belongs undoubtedly in the top five live singing microphones. It's is a very versatile and robust product.

Trying it, is buying it.

SevenBlast's review (This content has been automatically translated from French)

RODE M1
4
Rode M1 is a dynamic singing microphone designed for use on stage. It is advertised as solid and sturdy, built to last, the same argument that the shure sm 58 use, which I own as well. And that's what attracted me because I wanted a microphone similar to the SM 58, but DIFFERENT in sound and even more suited to my voice.

I have it since 8 months and I am totally satisfied. It's very very sturdy, with good output, good grip, no feedback at all, and the sound is well defined. In my opinion worth more than a SM58, but be careful if I compare to the sm58 and I put it in front of me, for my voice, the 58 is a very good mic. It's natural, clear and precise.
At first I couldn't choose between a Sennheiser MB85 and a t.bone (which had good reviews), finally I did not regret having bought it, even though it's at the same price as an sm58.
You have to try this microphone, or even all Rodes, because, honestly, for me it's a very high quality brand and most of the time less expensive than other brands (not the case for this microphone but for other microphones prices are attractive). I strongly recommend it, it seems versatile, good for a variety of music styles as for hard rock&nbsp;

Glöbelm's review (This content has been automatically translated from French)

This is the new competitor SM58! Both say that the M1 is built to last, as Rode offers a guaranteed life. it's a great quality price ratio. The SM58 will tremble before the challenger.
Buy at Sweetwater
Did you find this review helpful?yesno
Cookies help us improve performance, enhance user experience and deliver our services. By using our services, you agree to our use of cookies. Find out more.