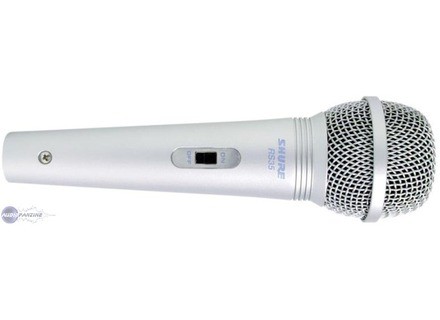 All user reviews for the Shure RS35

Shure RS35
4
The Shure RS35 is a dynamic microphone that is best suited for use during live shows.  Just from looking at it you can tell that it is best suited for live shows because it has the hand held style body and a grill to sing into.  It also has an on/off switch which are typically found on live microphones.  Of course this can be used in the recording studio, but I wouldn't recommend it as it isn't designed for this type of use and doesn't have a sound quality that will translate into the studio.

I've only used the Shure RS35 a few times for a live show at a local venue and while the microphone has gotten the job done, it isn't the sturdiest microphone and isn't all that indicative of what Shure can do.  It is a low end microphone that is catered toward those who want a cheap microphone to practice with or for live shows.  I would say that using it for band practice is the best thing that you can do with this microphone as it is cheap and will get the job done even if the sound quality isn't the clearest.  Shure is known for making top of the line microphones, but the RS35 isn't among this class.  If you are looking for a superior live vocal microphone, I would suggest spending a bit more money on a Shure SM58 as it doesn't get better than these and it won't cost you all that much more.  While the Shure RS35 is a decent mic, unless you are really looking for a dirt cheap microphone regardless of longevity or sound quality, I can't say that I can endorse this mic.  Of course the price is probably the best thing about this mic, but even if you can't afford an SM58 I would suggest trying this mic among other in its class as there are a lot of options out there in terms of cheap live vocal mics...