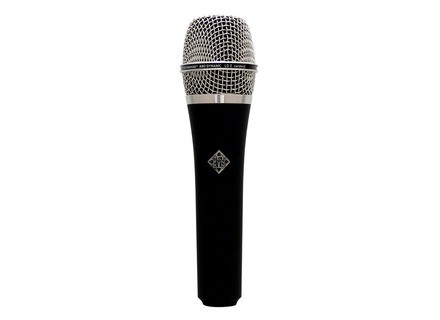 Telefunken Elektroakustik M80
5
The Telefunken Elektroakustik M80 is a new handheld dynamic microphone from the highly respected Telefunken USA brand. The mic is suitable for live shows, but I've only used it in the studio and this is probably going to be the place where it's best suited. The mic has a cardioid pick up pattern and a frequency range that starts at 30 Hz and goes up to 18 kHz. This microphone hasn't been out too long as far as I know, but the studio that I work at just got one...

I don't know exactly how recently the Telefunken Elektroakustik M80 was released, but it definitely wasn't too long ago. The mic isn't designed for any one purpose I don't think, but being that it's handheld and has the general style of a vocal mic, vocals are probably the thing that will be recorded most often with the M80. I'm excited to try the Telefunken Elektroakustik M80 out for other applications, as I've only used it on a single session thus far for recording snare drum. For this purpose, the mic is absolutely incredible! I definitely prefer it to the sound of the standard Shure SM57 on the snare, as I find it to be a fuller and more detailed sound. Of course the mic isn't going to be as cheap or sturdy as an SM57, but in terms of pure sound quality, I prefer the M80 on snare drum. I'm definitely eager to test the mic's versatility and I'm really glad that I'll get the chance to do so. I believe that we got the mic for using it on snare drum, but it seems to be more flexible than just for this application. The price isn't too expensive at all considering this is pretty much the ultimate dynamic mic. Home and professional studio owners alike should definitely know about the Telefunken M80...

I used the last few months. I have in my park microphone Sennheiser, Beyerdynamic, Shure and Heil sound for the song.
it seems like very solid well in hand we can say nice even coating of the body is special gum to prevent vibration, as Heil PR35.
For the price half the price of Pr 35.
Sound: I tried on the snare and I'm not 100% but it's good anyway. May be the short version is better for placement. His voice to a woman's voice is wonderful not strident but pleasant in the upper spectrum. Tried with female voice in jazz style, rock and hip hop. Super satisfied. For male voices I have tried and I am so used to Pr 35 that I positioned in second place, but the price is really different. Must still say that it was for hardcore punk bands where the guys shout loud and fine micro does not appear as it should. Against by an acoustic group it was great. C is really far above of a Sm 58 and slightly higher than the e935 following course voice.
A good buy I do it again without the eyebrows. I will rest a review in a few months to confirm or not. I will also try the occasion guitar amp.
So 9/10 but really c is subjective and after the application, it deserves a 10.

Published on 07/11/12
Telefunken is introducing at Summer NAMM its new Wood Series of the M80 dynamic cardioid microphone.