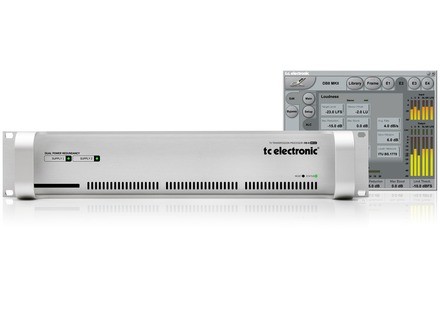 The upgrade is free of charge to all users of DB4 and DB8 - original version as well as MKII.

Here is what TC Electronic had to say:

"Broadcasters around the world are going through a transition towards loudness based production and program normalization. In order to comply with legislation such as the CALM Act, as a quick fix, it's tempting to insert ‘sausage processing’ at the point of transmission. However, sausage processing is completely against the spirit and the purpose of new American, Brazilian, Chinese, European and Japanese audio standards. With ALC6, processing happens at a higher resolution than any other audio device or codec in the broadcast signal path, and therefore DB4 or DB8 will never be the quality bottleneck."

Further, ALC6's adaptive Stridency Reduction parameter is designed to bring overly loud content under control while leaving normal content untouched. Another parameter allows the operator to indicate whether a program is already normalized, not normalized or sometimes normalized.

If the content is in 5.1 surround, ALC6 may automatically dissolve into bypass, or you may set a different Target Level depending on the format. ALC6 is transparent in several senses of the word.

Measuring the loudness of a 5.1 program can give different results from measuring a stereo or a mono downmix of the same program. Also, according to the company, these differences are systematic because measuring loudness according to BS.1770 is insensitive to inter-channel phase differences, while a downmix is not. Tight tolerance on program loudness therefore presents a dilemma when it comes to mono or stereo listeners, generally the vast majority of a station's audience. ALC6 introduces a new way of dealing with this issue: A 5.1 program may be adjusted based on what it measures in 5.1, or on what it measures using a specific set of downmix coefficients.

ALC6 is also designed to help get a higher audio quality and more headroom out of AC3 data reduction. The downmix part of the decoder is prone to overload, especially when AC3 DRC is set to ‘Off’. On the other hand, enabling DRC inserts a crude processor, which nobody can get rid of again. The new ‘AC3 Codec’ setting with ALC6's True-peak Limiter prevents downmix clipping while preserving headroom, thereby making it safe to switch off DRC and make AC3 more transparent, according to TC Electronic.

ALC6 also reads presets made with its predecessor, the ALC5.1.

DB4 and DB8's integrated Radar Loudness Meter, LM6, includes two new functions: The meter may now show loudness units in ‘LKFS’ rather than ‘LUFS’, and a Short-term loudness warning threshold may be set. Real-time loudness warnings are visible in the remote application on a Mac, a PC or on the TC Icon hardware unit. Warnings are also relayed via the processor's extensive SNMP alert and logging system.