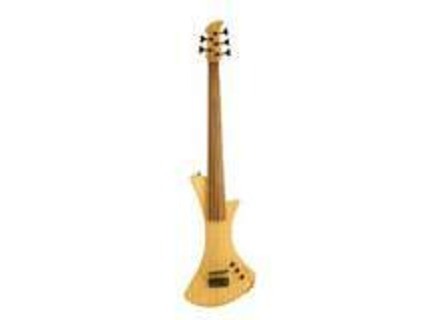 Zeta Strados Crossover Bass 5 C
4
Natural finish, longer than most bass guitars but can squeeze into SOME gig bags but not all [nor even most ... ] It's not a rock/blues/pfunk ax in any typical sense. It's more of a trainer for orchestral and jazz players ... usually sold to schools, but I use it in the Diva Duo: vox, KB and bass.

I got it cheap from GC cuz they don't like to have weird or unusual axes in stock. The price is hard to pin down, but it were cheap enuf.

The piezo PU's are unusual and outstanding. Somehow the electronics manage to sound a very 'non-guitar' bass voice.

There is no fretted version available, nor any lefty version, cuz it's not a guitar. I am left handed and find it very pleasant to play. It balances very well on the strap, even tho it's really a 'converted' EUB.

If it had a 2+2 headstock instead of the 4 in line, it would fit in a much wider choice of gig bags and cases.

It has an exagerated angle to the butt end which makes it impossible to lean it against a wall and you hafta be careful how you set it into some guitar stands [neck hanger stand is no problem].

Nothing fancy at all, but very plain and solid. Weighs about the same as a Fender.

Wood varies with price, as there are different prices of Strados. Everything is properly finished and fits neatly. Mine is alder, with a rosewood FB on a maple neck. The FB is hugely thick.

The reason for this review is for someone who happens upon one of these as used, like I did. New, they are thousands of dollars and most players will not spend that on this uglee duckie. But under $1000 used, it's a cool ax. It is spozed to come with both an end pin and a 'bout mimic' for EUB style playing. It does not come with a bow.

I'm gonna rate it as a 4. I mentioned [above] some minor details that I would change, and I don't consider them personal preferences. Anyone would benefit by them, and they would not raise the cost, so therefore I cannot rate it a 5. But those details are about transporting it, and parking it during breaks, not about playing it. On the gig, between the breaks, it's most definitely a 5 !