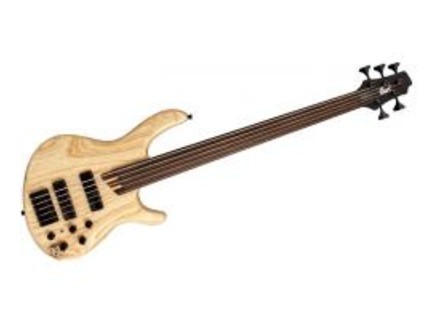 B5 FL, Electric Fretless Bass from Cort in the Artisan series.

alex83pearl's review (This content has been automatically translated from French)

Cort B5 FL
4
- Rosewood 24 frets
- 2 Bartolini MK1 pickups
- Active Electronics
- 3-band EQ
- Switch Active / Passive
- Pickup selector (knob)
- Bridge EB12
- Black hardware
For the price there is nothing to say, the switch active / passive is greatly apprciable, but be careful not to let the lower branch APRS use, because even in passive mode, the battery consumes ca! (Ed. panic one morning and I find it without having his APRS sleep 3 days left arm ...)

Channel enjoyable, non Frets drawings (ca ...), good shape ear microphones of origin.
CHAC is easy to acute, the weight is is standard, on the other hand is not easy to get good sound at all beginners (fretless requires ...), but it's the same on all fretless .. I personally find the position right hand is really enjoyable.
Slap almost avoided, otherwise not get the top top and damaging the handle ... (At same time if a fretless c t'achte not to slap ...)

I agree my personal bass Do Sol Mi R, frankly that makes him a serious condition do not take too thin (28 trs is good).
I play funk and so far no soushi!
I have a Fender 15 "Rumble 100w which is suitable for heat.
Gnral the grain is really nice, ca APRS dpend lot of strings.
We keep a good DEFINITIONS sound at all levels and rglages, the whole is enjoyable.

For the price, it's rare to find this quality l. ..
It's been 1 year I use it and it sounds solid. What you ask for?
What is rare is to find a 5 string fretless, and it is true that unless you spend a hundred miles and are found not to + or-600 ...
Personal I t surprised by the quality for the price gnrale is when even a low-midrange that sounds like a bass at least 500 more.
Trs good choice for those who want to tackle the 5 string fretless.
Exp I would do with that choice, even if the offer is frankly a limit for 5-string fretless mid-range ... (Nothing in Ibanez, nada Yamaha, Fender is not talking about ...)

=> The mcaniques NCESS have a bit of a screwdriver to keep the agreement, although they seemed minor but ultimately rsistent trs well since 2003 ...

- Despite the end of round five strings, although DGIG in acute
- Reasonable weight.

=> This bass is one of those that took over easily without asking any questions mtaphysique, ergonomics is great and fun game IMMEDIATE. Lgre with a handle end, it is played without fatigue than sitting upright as well. I use only the fingers in play "normal" or slap and this poses no particular problem.

- Uses a branch in BlueMax compressor scne both in the studio,
- SETTING THE trs compression light so as not to dnaturer the game

=> The electronic equipment Bartolini satisfy me completely, c'tait exactly the style I was looking for his sweet, balanced it's velvet. This fretless can be used in quite a situation and provide thundering about the results in styles o is not expected.

=> I used this bass live some time without ever having the need to take a "backup" and continues to use rgulirement recording. It is, of all my basses, which I prfre for exemplary ergonomics and weight reasonable. I have read many opinions on this ngatifs MODEL dplore but not problem therein evokes: it does not fall into ruin after a few months, do dr rule no Manir systmatique and continues to operate normally without having had to replace all the ds Premire minutes of play! Otherwise why did you buy then? ...

zingzing's review (This content has been automatically translated from French)

The neck is very playable (heard it is known to play the fretless, otherwise you have to train ...)
Treble, no problem, and feel of the bass is very good it is drawn with lines fairly common low modern comfort and balance (standing / sitting).
In practice it is an instrument natural and instinctive, a real instrument in fact, which is not won in this price range.
This justifies that price by several biases the manufacturer for more affordable without typing in (or very little) in the sound quality and play, the savings are made on the varnish: the bass is very "rough" it gives a sensual side that goes very well with the fretless (you can feel the wood grain on the neck and body) after this point it's really a matter of feeling in the trial of the instrument .... I love me, you can also hate, but if your budget for a new 5-fretless is 500 Euros must think, I have preferred to buy the sound of the varnish and my beautiful since proven ... ...

Then it starts a fretless to suit from the time it dominates, I read in the previous opinion we could not make slap with .... Why?? is wrong, just slap on fretless is not the same as a conventional low, it is much more discreet is not a slap in the oeuil (or ear), but rather serves articulation music
a kind of "Bong-PoP" very round, which embellishes the Rhythmic course of a song.

The game is very interesting pick also .... Nothing to do with a frenetic rock bass, then it is rather low in the register of sixties / seventies kind of ViolinBass Hofner McCartney (Beatles) or Robbie Sheakspeere (wailers) with treble and midrange muffled much bounce in the genre as there the bass line as pieces of Gainsbourg Initials BB for example, probably Rickenbaker Ampeg has a lamp of the time ..... magic .... This is the kind of horizon to pick the game in some fretless you around with the modern equipment, if necessary to find the real (that is not the same price!).

For the classic game to the finger is there, with a wide and rich textures of attacks and was in the hands of a reactive instrument that responds to the game with its own effects and the ability to make it say what the 'we want is a sound that does not accept simple bass line there is a dimension and more malleable.

A restriction on the mini microphones and electronics that are good but I think poorly chosen, then there is a slight conflict between states, but fretless bass and microphones that they are a very modern design with a sensitivity very bright and a lot of response in the high end makes me sometimes feel that the preamp and the pickups are not good on the bass. Electronics with a low share of medium larger rounder and a simple filter for the treble would have been more appropriate. It is perhaps not at this price ....

I've had a little over two years, and what interests me most is the sound very wide which allows for entire tracks that we do not s'apperçoive it has played the fretless and release of glissandos groovissimes etc. .... In practice and especially with the precision we have a very wide range of possibilities.

In short it is a bass not look, but the price associated with its manufacturing quality, playability, the sound clear and full of detail and finish make it a quality / price ratio rarely see one.

NicoMetal85's review (This content has been automatically translated from French)

* No freight just marks on the top of the neck! + specific landmarks that I could see on a fretless

* Handle super nice and very late for a 5 string!

* Ergonomics very good! not so heavy that it's stupid! everything has been designed for outstanding comfort!

* You roll a great sound without cramming too! Barto shit I still cie! unbelievable for this price! I play with fingers and it meets wicked!

* The fretless is often the jazzeaux is not it? bah I use it in an heavy metal band with symphonic singer! and I must say that I know of guys in this style fretless! it gives me the pieces sonoritées giving all their fullness and a touch 'Arabist

* I get a very powerful sound! but very easy to adjust the pickups and saw my Hartke head! to tell you, impossible to play a + 2 out of my head 350 w!

* I play withthe natural sound of the Hartke amp 2 corp, I just used an old Zoom 606 per ride for my lead bass! It serves me as a tuner! post a disto and play with a pick on what kind of bass would be an insult!

* The sonoritées are so vast that you can do it all!

* I have used it for one month to replace my old 5-string fretless Jack & Danny very well yet! I bought 300 € to OCCAZ via ads on this site!
Without you lying low this is one of the best fretless that exists at any point! she sleeps even low to 2000 €! sound microphones strong, clean and sound violoning had his name all sufrages wins! Do not do shit to try other styles!
The strings are very close and for lead is perfection! to note that you can switch to passive by moving a switch on the bass!
It is more than natural wood colors of the most beautiful effect!

I do it again without hesitation that choice! I fell in love!

you can see the pictures on the website of my band HOLY GHOST http://www.myspace.com/sainteombre