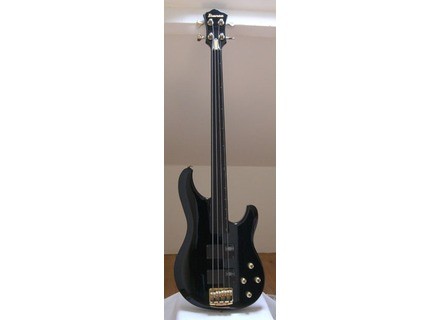 MC940, Electric Fretless Bass from Ibanez in the Musician series.

Kab77's review (This content has been automatically translated from French)" Musician ..."

Ibanez MC940
5
Low Japanese manufacture of 70/80 years.
The body is ash, with handle 34 "scale maple and walnut crossing in and the key is bne is a fretless 24" squares. "Class.

The fittings are gold but mcaniques money but I have been to me that rdigeant this article is that bell has not so much. I look pictures on the net and apparently it's original, bizarre as choice. The bridge looks solid and he does his job.

2 microphones, a large single coil in the bridge position of the size of a soapbar and a very large pav whose magnets are disposs as a micro precision in the neck position.

For rglages was:
1 volume
1 balance
Swtich 1 active / passive
1 tone (which operates in passive only)
1 bass knob
1 mdium knob (push / pull-changing mdium frquence on mine, I do not know if it is original)
1 treble knob

The low even uses STING.
This is a very, very, very good bass, really well built, has exudes efficiency and quality. It has an aesthetic a bit dated, but do vintage! I personally am not a fan of vintage, but I forgive him largely by manufacturing quality and especially SOUND!

Handle: it is a wonder. I rarely (if ever) been such a comfort to play. I have several other low, and frankly see. This is the best round 4 strings on which I played. We have a good access to acute (neck-through requires ...), the notes enchanent writ v is that of happiness.

For ergonomics, it is a bit heavy, with a good strap passes. Sitting it tends to slip a little but nothing wicked good.

Gets it easy to sound good?
Yes. Active Llectronique is very effective, we do what we want, passive was a terrible sound.
Versatile wish, it really has a very tight sound palette.

I put 10 because for me the weight is a false problem, then we saw heavier ...

The sound is the strong point of this bass.
I play a bit of everything, jazz, funk, pop, salsa, variety predilection but my style is flamenco. In all cases, a ring, and not a little. It is not for nothing that this bass is a reference number!

The neck pickup has a deep sound, rich and deep. The bridge pickup sounds more condensed prcis but sweet, has Pastorius. I t very surprised that the mix of the two microphones give its fairly modern!

What sonorits you prfrez, you dtestez?
It's simple, as long as not grow eq Basically, I like the sound of this bass. In all configurations was a musical sound.

I put 10 without hesitation.

I use it for a few months and I'm entirely satisfied.


Have you tried many other models before acqurir?
I have several other low, especially a Fender Musicman Stingray and Jazzbass but it were not what I was looking for.

What is the particular feature you like best and least?
Most: playing comfort, SOUND
The least: Heuu ... maybe the volume difference between the two microphones, but it's really just Dtail ...


Overall rating: 9 because the vintage look is not my thing.
Did you find this review helpful?yesno
»

Ibanez MC940
5
Made in Japan series Musician
Channel driver with ebony fingerboard and pearl landmark.
I bought shrunk but I did défrettées by a luthier in 1989 and was screwed down and restored by another luthier in 2012.
Two dual microphones and full control with an active three-band equalizer.
This low exudes premium level finishes.

Low light enough with a great ergonomics, the violin is of very good quality and the resulting sounds will delight me.
The settings are anyway despite not difficult to obtain appearances.

This bass is perfect for me because the sounds are soft and sweet I like to style music that I like (jazz, blues, funk, Bossa ...)
In addition, it is a fretless that is not his Fender and it is significant because it is an original bass.
I do not hate anything in this bass.

I'm in a relationship with for 25 years now and I am offered the with my first pay at a summer job (I was 16) so obviously it has great sentimental value for me.
It is a beautiful instrument.

Kab77's review (This content has been automatically translated from French)" Musician ..."

Ibanez MC940
5
Ibanez Musician MC940 D5
Low Japanese-made from the 70s/80s.
The body is frne, with handle 34 "scale crossing in saddle and walnut and the key is bne is a fretless 24" boxes. "Class.
The fittings are dor but mcaniques money but I did realize that rdigeant this article is that Bell has not so much. I look for pictures on the net and apparently it is original, bizarre as a choice. The bridge feels solid and it does its job.
Two microphones, a big single coil in the bridge position of the size of a soapbar, and a large paved trs which the magnets are disposs like a micro precision in the neck position.
Level was CONTRL: Volume, Balance, Tone (works in liability only), Switch Active / Passive, 3 knob to legalization (the mdium is a push / pull that changes the frquence m dium, I do not know if it is original)
Aesthetics is a bit dated, normal instrument for 30 years! I am not a fan of vintage lesthtique but I forgive him much for the quality of wood, violin (great job by the way), its ease of play and especially the sound!
I put 9 and not 10 because I'm not a fan of the vintage look.

The handle: it is a wonder. I rarely (if ever) been such a comfort of play I have several other basses, and frankly see nothing. This is the best 4 string neck on which I jou. It was an excellent Access in acute (forced through sleeve notes s'enchanent ...), all is, in short, is that of happiness.
For usability, it is a little heavy but equilibrated with a good strap to pass. Sitting it tends to drag a little but nothing too mchant.
Do you get a good sound easy? YES. Llectronique active trs effective, we do what we want in liabilities was a terrible sound. Versatile wish it was a really tight sound palette trs.
I put 10 because for me the weight is a false problem, then we saw heavier ...

The sound is the main strength of this low. But this is my personal opinion!
I play a bit of everything, jazz, funk, pop, salsa, but my variation on prdilection style is flamenco. In all cases, a ring, and not a little. It's not for nothing that this bass is a REFERENCE! The neck pickup has a deep, warm, rich and deep. The bridge pickup gives a more condensed prcis, but soft, a bit like Pastorius. I t trs surprised that the mix of the two pickups gives a fairly modern sound!
What are the sounds you prfrez, you dtest? It's simple, as long as the eq not grow back, I like the sound of this bass. Especially on the bridge position, I find the magic sound.
I put 10 without hsitation.

I use only a few months and I am Fully satisfied. This is a MODEL that is rare ... I stumble upon a site, used coud'bol!
Have you tried many other models before acqurir? I have several other basses, particularly a Jazzbass Fender and Musicman Stingray, but n'tait not what I was looking for.
What is the particular feature you like best and least? Plus: The ease of playing, SOUND! The least: The vintage look ... but others may have be a plus.

Conclusion: For me it's the top of the fretless, but remains a personal opinion trs. It's best to try to get an ide!

Ibanez MC940
5
Good! It is by seeing this lack of advice I give mine.
The musician fretless my taste is simply the best fretless bass possible and all attempts to overcome this instrument makers of the 70s/80s flagship brand Ibanez are Russian and aesthetic point of view!
In fact the instrument of sulfur look a bit nerdy today except for clones of sting PERIOD "RGATA white."
But I do not care. Sustain, contrle the total marks, the range and quality of violin irreproachable make it one of the best instrument ever built by the Japanese firm!
Regarding the electronic fashions change too quickly Contents microphones to remain objective view of an instrument of thirty years! I'm still skeptical about the dual mode (passive active), unsatisfactory for the purists in both camps, but there is ample room To insert the electronic reading of your heart!
And finally she is ugly, it is heavy but it is the best four-string fretless possible and it costs bugger all today!
I specific on that I do not availing oneself of this instrument is a friend who lends me for sessions fretless, I play on an old GENERALLY precision 66.
J'espre convince me that some jazz rocker not to fuck with their feet'm saying dude luthiers, and bassists for adventurers to afford a pet dcevoir instument that user.

A fantastic race driver on the two octaves!
Unrestricted access to acute
It is extremely heavy but balance while standing, sitting it tends to slip!
Yes to a good sound but I am not you!