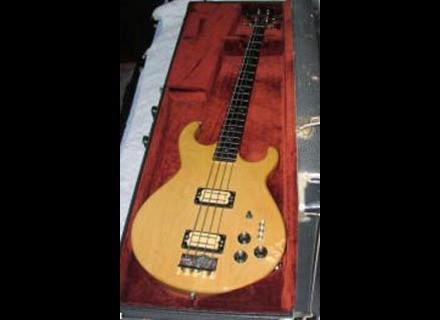 The handle is nice although quite round, like "trunk", and requires some practice. Access to acute is easy for anyone who does not dwarf the fingers, but there are only 20 frets. I have the action pretty high. I find it easy to play, but a lover Jazzbass surely find it unplayable.
The ergonomics standard is any good, both sitting and standing. The weight is bearable, balanced.
The setting is quite subtle sounds, the tone volume pot is very effective (especially 1 to 5), it is not really a toy "plug and play". Similarly for phase switches that allow multiple combinations, which requires some time to know them well.
A word on the stereo output, useful with 2 amps, with a twist on one of 2. The sauce is difficult to develop, but once done, it's hard to part ...

I used to pop rock, very melodic parts for these: she excels!
It is not very versatile, no use trying to play metal with, it's still very seventies rock, very singing, in the super melodic.
Before I played on small amps (Torque TB100, Ibanez SW-25) and was quite accurate, with no effect, although BAFl had trouble cashing. Now I have a Fender TBP-1 preamp connected directly to the PA: it rocks.
The sounds most natural to the bass sounds are round with a good dynamic. The output level is high which leads to the lower gain amps compared to a Precision eg. Many also sustain, treble very pure and a level playing field throughout the length of the handle. The sound is always clear and the bass fair, which is respectable for a mid-range vintage instrument.
The neck pickup purring to perfection, without drooling. The bridge pickup, percussive, is not devoid of curves either, but shows little that opens for incisive tone.
The switches behave like splits: All statements, hambuckers spew all their power, it's heavy and fat, all lowered, it is a palette of sounds thinner, more jazzy. I recommend the 2-1-2 position (only the core switch down): this rock and going everywhere.
We are far from crystal clear sound of a Jazzbass but this is not the goal. It adapts with ease of fuzz, but remains soft with effects such autowah, synthebass, etc.. It clearly reveals the game to pick

I've had a year this bass is a tank. I wanted a sound that approximates that of Paul McCartney. Obviously, it is not as angry as Rickenbaker 4001, but in the end, she has great personality. I love the heat, but I understand that its electronics (relatively) complex rout some. I also like his timbre, to venture elsewhere in rock, including slap ...
It is a thoughtful purchase, I find the terminals for 600 and I'd do it again ...
I tried many before it corny, but I wanted an old lady who has a well and she has lived: that there has been much played and has hardly a ripple, for 600 €, you may fall more evil!
I recommend to lovers of vintage instruments that do not have deep pockets.
Did you find this review helpful?yesno
»