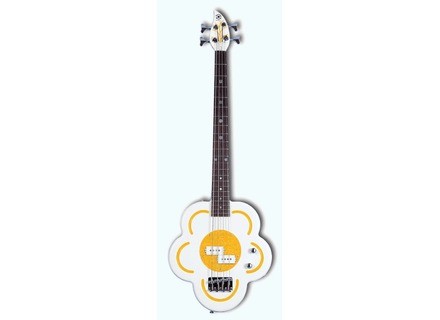 likouidsunshine's review (This content has been automatically translated from French)

Daisy Rock Daisy Bass
3
Low child daisy-shaped with a micro-type homologated Pecis Duncan.Livre Seymour with his candy bag Rose trstrs class.
Pt pitch more than the average one is between the size of the guitar and that of a true low
Made in China.

A surprising by its ergonomic handle, although Access in acute top.Ceci not be combined with the fact that there is a big dsquilibre, the head perpetually falling down, the trick really unbearable over time.
Only way to remdier, dplacer the strap-lock symtriquement the opposite of the handle, below, further rduisant Access in acute, which become trs sport.
Otherwise, a nice little low-toy, not heavy, light and easy jouable.moi I like it.
The only problem: the sound.

Ba yes, it is a low to bushels, it should not be difficult.
The sound is poor in both DEFINITIONS infrabass impossible to have the big sound of a real bass, and quite prcis, Seymour Duncan oblige.
It's a good ide for putting these pickups as a catch up a little of his bois.Jouez not the branch, almost no sound sort.Et oddly, when the branch ell starts ringing little prs and ds it is a little warm after 5 / 10 minutes, it loses intensity as it fades compltement.Aucun doubt, his worst handicap, is the wood of the body, which is really not for rsons.
aaaaa damage! c'tait if the case has little bass will make a coronation ...
The sound is poor in low enough prcis, and brilliant, not to dnu intrts is a drle bte of this instrument.

This bass is a first look, and it's not for adults!
Personally, I like his cot "ass between two chairs" assumed between bass and guitar and has a great handle.
But it's not a true bass.
Did you find this review helpful?yesno
»