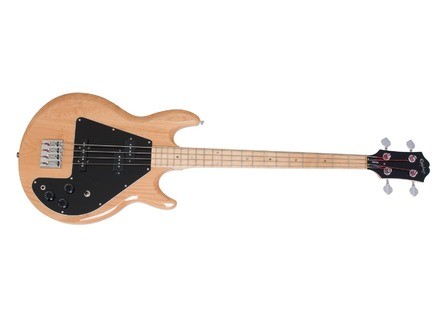 sonicmath's review (This content has been automatically translated from French)

Epiphone Ripper Bass
4
In fact this is the copy of a model dating Gibdon 70's, which bears the same name. the bass is made in Korea. It dates from 90 years according to the seller and I want to believe. But it is not a current model, just like the original.

This one has a microphone hidden under the black plastic so I do not know at all how it is. In my opinion it is a simple. There's a tone and volume, all that he has more passive and simple.

Channel 20 frets, normal length, well, not short-scale. The key is maple, as I think the handle, which is not common in Epiphone, but the original model has the same round here douc There's exceptions everywhere.

The bass seems to keep the formal characteristics of its predecessor, but crops and round arched end. However wood still seems to be a weird thing with Epiphone has the secret, hidden under a veneer opaque (although the most part of Gibson are natural color). Light wood that not sound like wood when tapped. However the handle is a real handle quite heavy. So that the bass is neither heavy nor light. The handle is round, I would rather close to the head and thick as it should. Handle this, very interesting.

wholesale original bass and sober at a time.

The handle is screwed but access to the 20th box is good, if you do not want to play super fast.

the handle is nice again, virile and end at a time.

the weight is correct, for I against aps been able to use up because of the ATACHE courois which can be screwed. Either way you know it's the strap that is stability ...

For sound, well it's not complicated with a single microphone and a passive EQ. the pots are surprisingly effective for the Epiphone. The tone switches between a well round a brighter sound by adding the acute, progressive enough on a beach. For the rest ask your amp.

At first it sounds great vacuum. We can work without connecting it with no problem. It has a nice sustain.

Good for sound amp (the main still ...) I can not necessarily speak because I have no amp. I record through an old Yamaha guitar preamp on the side of the light. I think it still has a nice little grain even if the sound parrait me a bit flat, so it sounded really good in store.

I'm on it is made for extreme sounds rather a basic rock record, even if the sound is easily tamable. In any case with modern amps is easy to make a big sound with anything, RAPORT a salesperson in a store that was low sound a little like a Squier Bronco Fury ...

Note that it supports the well-packed game, and can even slapper.

So it's low una original and fun for those who want ultimately to choose between a P-bass and a P-bass copy, since it is in the same register.

However it buzz a little, still it is a problem with a bit of weight over a main eq Possee hop on the ropes and you hear nothing. But then that means that the mail is not super reliable over time.

Fb02's review (This content has been automatically translated from French)

Channel super nice but it's not what we call today a "quick stick"
The access is through the acute
Ergonomics is good for big guys! The case is huge compared to modern low, it is the size of a half body but is very thin, however. For weight, it's complicated, if at first it seems rather cumbersome, it eventually support it anyway but after several hours of use, if the strap is not wide, it feels a little in shoulder.
For its no problem with 2 knobs but be careful not to slap with that is very typical 70-80, it has the character of a GIBSON OOU Ricken a period, the sound is very biting, sticky, slightly eral it is finally very close to the original Gibson models but do not expect to get a soft cast and, in short, a modern sound.

It is exclusively intended for a low rock, see HARD-ROCK, it's the KISS ALIVE! to be clear and if you really want to know what it looks like (it's so that difficult to describe a sound) is also the first sound of AC / DC, NIRVANA, your disc to get an idea! It is very aggressive and can not vary so much especially with a single microphone attached where users put their GIBSON GRABBER micro sliding most of the time. we love it or hate it, there is no middle ground.

I recently acquired a lot but I've played it.
I found the spirit GIBSON RIPPER GRABBER-nine! (Apparently it's a 1998 model), I recommend to all vivemnt ceuix who want to find this type of low pounce as original GIBSON become unaffordable (unjustified) and are worse at the end of the handle.
I personally spend a lot of time trying a maximum of guitars and especially bass is my passion! Personally, I have a Geddy Lee Fender Jazz Bass, a bass luthier fitted on top and I'm super happy with this acquisition.
Originally I Charches a real Gibson but still too expensive (1000 euro) and very often in poor condition (GIBSON users appear to have paid less care than users JAZZ BASS is a curious but observation) short I bought this instrument in memory of my GIBSON RIPPER I sold my manufacturing SCAMPI, just for the look! I was thinking of buying a substitute, but not at all, and the top and I do not even exchange it for real is to say .....
Special warning: In the 90s, EPIPHONE out this model with a single microphone that I do not know the name, anti-fad, there were too few sold, the brand quickly removed from the model market, it was nevertheless very close to the original (bridge - wood - his - Bolt-grabber and not as stuck as the ripper - and especially nature), some details of the separate GIBSON: cutting the horns is not quite the same, the Epiphone is less gross and cords do not cross the body, the belt clip is located with the microphone and of course, but that seems to be of similar composition to listen of sound reproduction.
Be careful though, because a few years ago, the brand has released a similar model and always custom shop version currently on sale (2007) called RIPPER clear but with easel and microphone type FENDER !!!!! But it is 600-700 euros, a JAZZ BASS better in this case because buying a JAZZ BASS disguised as RIPPER, I do not see much interest especially as the FENDER has better ergonomics and better weight and best odds. The exceptional model just described is not the one's currently available by the brand.
Did you find this review helpful?yesno
»

leguitaristedu02's review (This content has been automatically translated from French)" Excellent!"

Epiphone Ripper Bass
5
-In which country was it made?
Made in Korea

What type of sleeve?
Bolt.

-How many frets, what kind of microphone and their configuration?
20 frets, 2 pickups (1 micro precision type and type 1 micro jazz).

-What are the settings?
A selector, 2 volume controls.

-Handle is it nice?
The handle is very nice, fine, small.

-Access to acute (last string) Is it easy?
Impossible.

-Do you get easily a good sound?
The sound is just magnificent in the bass as in the treble, with a slight sustain ...

-Are they suitable for your style of music?
Yes AC covient perfectly.

-What kind of sound you get and with what settings?
You can come to have a big bass sound like a "small" his treble. I can not even really the rule.

"With what (s) amplifier (s) or effect (s) do you play?
Eagletone 20 watts, 150 watt Fender and sometimes MarchBass.

-What are the sounds you prefer, you hate?
I love its sound in general.

-For how long have you been using it?
For two days.

-Did you try many other models before getting this one?
I had a Dean Edge One, it's not the same thing.

"What thing do you like most/least about it?
I find this bass perfectly.

-What is your opinion about the value for the price?
Knowing what you know now, would you make the same choice?
Yes, I would do this choice without a doubt. I think the new paid 309 euros is a good price.