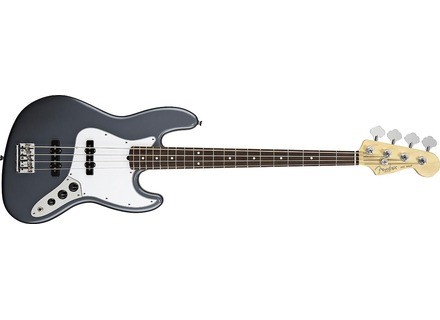 Fender American Standard Jazz Bass [2008-2012]
4
I went in to one of the good guitar shops around and saw the bass and it was wanting to be played! I tried it and a couple of others but really it was the one for me. I paid 400 pounds for it.

I love the tone that you get from it, I haven't been playing for years so it was a big step up from my yamaha rbx170. It's also really easy to play with. It looks great too, mine is black.. beautiful.

Generally the construction is good but I and a friend of mine who has a standard p bass found that the bridge was dodgy. Apart from that it's excellent construction quality!

Fender American Standard Jazz Bass [2008-2012]
5
I bought this bass off of Musicians Friend for $649. I needed a new bass guitar and experience has taught me to trust Fender instruments.

I love my Jazz bass. As you will hear most people say, they have a good offset body, and feel. The slim necks (much better feeling compared to bulky P-bass necks) and the electronics are great. Nice sounding and has a good tone range. The finish is nice as well, I paid extra for sunburst.

Good construction, excellent quality. Good for beginners and experts for any style. (Except maybe metal)

i love this bass. The sound is so clean, and the low end is fantastic. It is smooth and flows like a gentle river. but then, this thing can funk it out, or rock, and kick ass.

i dont like my color, midnight blue is a little bit femine. I covered the bass in bumber stickers, and blood from my fingers.

This is made to the highest standards. it is awesome, i smash this thing daily, and its just like new.

Buy this, this will kick any ibanezes ass. You cant go wrong, by the best, fender!

Fender American Standard Jazz Bass [2008-2012]
4
bought new at a chain store
i use it to play mostly classic rock, some alternative, and very small amount of funk
paid 350$

This is a very good bass, with a good sound and nice looks good too. It is a much better value than the Fender American line (try a number of them until you get one that really sounds good), which is really just too expensive. DO NOT BUY a precision bass!!! They sound like CRAP compared to a jazz bass, and a jazz has a better layout for playing.
The bass has enough sound shaping for basic needs (3 knobs), some amp presets or pedals might be needed for more advanced people. Even though it has only 4 strings, it's got enough range to be serviceable, and it actually plays up high, which my Guild never did.

The pickups are of lower quality, but that is a minor thing. The body and metal parts get real dirty real fast, enough to be worth mentioning (my old Guild never had this problem). The action is really low, which greatly impedes slapping, tapping, and other funk, but it just makes you better. Overall though, these are minor cmplaints, don't let them stop you from buying this bass!

This is a very well made bass. Don't let idiots that say Mexican are low quality fool you, it isn't true (i've always said that standards are made by mexicans in mexico, americans are made by mexicans in america). No off parts, nothing badly assembled, thank NAFTA for that. Like i said, the body does pick up a lot of dirt, i don't know if this has to do with quality or that i'm a slob.

Overall, this is a very good bass, and a perfect starter. Once again, the action is way low, but that can be fixed. This bass is an awesome value and a whole lot better than most out there.
As you feel you need to, you can modify it for very little cost, because it is not complicated in consturction. I raised the bridge to fix the slapping problem, use amp presets, sometimes a wah pedal, rotosound swing66 strings; it sound great!


This review was originally published on http://www.musicgearreview.com
Did you find this review helpful?yesno
»
Read the 9 user reviews on the Fender American Standard Jazz Bass [2008-2012] »