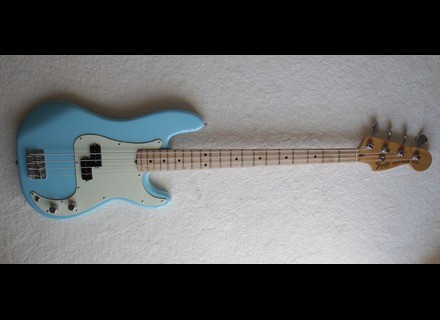 Fender Precision Bass (1979)
5
This is an American-made bass guitar from 1979. This guitar has one passive pickup, as well as a volume knob and a control knob. The output jack is on the face of the instrument, as opposed to the bottom on other instruments. There are 20 frets on this bass. The version that I played has a guard on both the bridge and the pickup, which is absent from the photo up top. I guess it depends on the previous owner's preferences. The bass has an alder body and a maple fretboard.

It is pretty easy to access all the notes on this bass. For playability, this is a fantastic instrument. I wouldn't expect anything less from a Fender Bass, let alone an original P-Bass. It is a bit heavy, don't get me wrong, however this particular year I can remember not feeling as heavy as some of the others that I have played. For instance, the 60s P-bass I was playing for a while was much heavier, and in fact it was an endurance test to be able to stand and play it the whole time. This one is lighter and doesn't seem to sacrifice feel or tone at all. Getting a good sound out of this bass is easy.

This bass has some GREAT tone. I love the rich low end, it can go from being smooth and warm to having a huge low end punch. I would say that for most types of rock music, especially hard rock like Led Zeppelin, or AC/DC, or even some of the punk stuff, this is a fantastic bass. This definitely is not suited to lighter styles like the Jazz bass is, in fact, I would say that it's a very different beast from the Jazz Bass. It also doesn't quite have the roaring tones of a Warwick bass, as those are newer and definitely different. This has more punch and intensity, which I really like about it. It can really deliver on deliberate, strong punchy playing. It also has great midrange and high end to balance it out, though it doesn't go overboard on either of those frequency ranges. If you need to cut some of the low end to roll it off a bit, it still sounds fantastic.

I love the sound of this bass more than anything else about it, though it does play fantastically. I think this is probably the newest of the original Fender basses that I've played and really enjoyed. It's definitely going to be expensive if you see it, but it will be cheaper than a 67 P-Bass, for instance. Thus, it's still a great buy. Granted, this might be tough for a lot of you, but getting good instruments is tough for a lot of people now in general. I've played a lot of P-basses, and liked most of them, and therefore, this is no exception. A great buy.
Did you find this review helpful?yesno
»