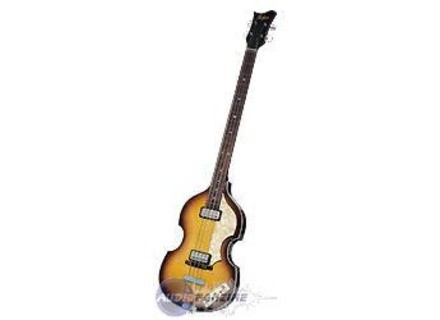 lacoune's review (This content has been automatically translated from French)

Hofner Guitars 500/1 Vintage '63
5
Low Made in Germany (finishing best of the best !!!).
22 frets, tune over 76cm (ease of extreme games !!!).
Two humbucking pickups HOFNER h511b.
A volume balance a severe acute balance, the first three switches rhythm / solo kind of bass boost a fairly efficient ON so that boosts the bass and treble 1 ON for this one so acute.

The facility is and I repeat myself quite disconcerting, this is in tune of over 76cm, it's a toy that was in the hands but a toy in her bewitching and awfully hollow. This low exhales the boxes at the top of the handle is a fall on his ass!
The ergonomics are quite good there is a place without too much trouble, the game sitting poses no particular problem, upright bass does not feel it is forgotten.

I also play on american deluxe jazz bass, bass at how versatile it flattering, but the mediums. The HOFNER it, teleport me a few decades back, yet not a fan of "beetle" his case his net empty dishes are deaf for many it is the low fat par excellence what.

Since one month I'm having I juggle between my two beautiful, yet they complement beautifully played on a small SWR-12, no effect, it really class.
No regrets OCCAZ bought 1200 euros it had barely one month, I would do this choice without a doubt.
Aluminium Case foun of beauty in the beautiful perfect finish is protected.

PS: Apparently it's not just for the technical details that you're not on top Glitchmann, you tell me about a car?? I advise you on a forum you will be tuning www.r19tuning.com may be more at your ease! Then if you live in a cave and after eating your kebab fries you do not wash their hands is not good (also works for the pee) then yes your bass will rot. Maybe you're young, so I understand you young, spit your venom.

Inspecteur Van Loke's review (This content has been automatically translated from French)" the real, made in Germany!"

for those with the HCT model, re outcome is significantly smaller, narrower bodies and body thinner, lighter bcp, table and much more curved back and sculpted! very pretty sight!

The dimensions are exactly those of the instrument in the 60's as seen in the photos including the Beatles.

the logo on the O Hofner has no umlaut (Hofner Höfner and not) because the logo did not have time.

HOFNER is so special .. one of the only surviving European brands of 60's design and offering a sense of time ..

franchement.les Chinese are tops, too, I enjoyed myself so much with the HCT and the ignition, perfectly usable on stage and studio! but after re definitely fills me

some things bothered me: the CT is not enough "space" in the box, I am an enthusiast of the "full hollow body" more than I hate the white binding around the neck
(Which was not on my first CT HOFNER purchased in 2006 for that matter, but on the following series ..)

the CT often sound wrong with the net flat on the bass string, unless you use the net semi flat or round.

the ignition, she sounds great "hollow", I love the lightness but also a little "counterfeiting" in my gout.j 'loves her sleeve though, and at the feeling is closer to the end and re vintage models as CT.

Re after 63 is a high-end model, bringing together the qualities of previous models, and no défaut.elle rings true with the net flat on any note.

in violin, the table is much more curved than the CT, the handle is as I ésépre without binding, the sound is that of microphones "staple" that fitted.

Many people buy the Hct, and customisent (mechanical, control panel German, button straps and case ..)
whereas almost the same price for all that together they can issue a re-hand with the case.

I had mine at 900 euros, one of my friends in a similar case before (re cavern after) There's a few years .. just be patient and take the opportunity ... who seeks finds!

Re after 63 is no longer manufactured or sold (it has more y'en Thomann for example) so the issue will be re turn recherchées.c is a good investment.

Hofner has launched a magnificent series 500 / 1 after re 59 and 58, however I am less a fan of the re issue 64 which features a white binding around the neck on this model .. I really prefer not.