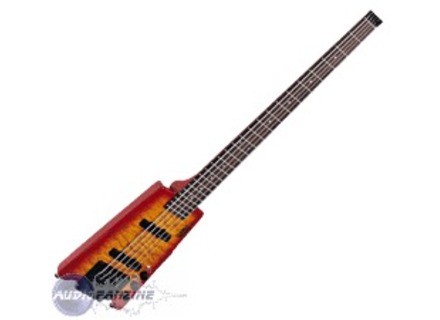 Hohner B2AV
5
I bought my Hohner B2AV (steinberg licensed) bass via the web site of Ed Roman Guitars. The cost of the bass was $499. I also bought a beautiful Hohner case for $89. With shipping the total was $618.
I have been a faithfull Rickenbacker owner for 25 years. I never had any intention of playing anything else. The ric felt like an extension of my hands. But times move on and I was increasingly confronted by cover tunes with the need to hit lower notes. So I finally decided to get a 5 string. I did a lot checking around on the internet for a 5 string ric. A 5 string ric 4001 or 4003 is as rare as a hen's tooth. those that were available were seriously expensive. A new ric 5 string also costs over $2000 and I really dont care for the way they look. The sad realization was that I would have to get something other than a ric. So, I thot, well if its going to be different then just start all over about what I really need and want and make a selection based on " the bass, the whole bass, and nothing but the bass. With this minimalist approach in mind, naturally I ended up investigating Steinbergers. A classic Steinberger fit the bill. Its pretty much "only what you really need". Its a true case of form following function. Sadly, there was not a single steinberger in Portland Oregon ( a major city) that I could go try out. In fact there was not a single headless bass to he had. I started surfing the net looking for a steinberger. Right off the bat there was a model for sale from Musician's Friend. $1000 it seemed like it might fit the bill, all carbon like the original, active pickups, steinberger hardware. I started looking at reviews of this bass. There were almost none to be found. Its a new product sold only by Muscians Friend. After some more searching I found the Ed Roman guitar site. Fabulous source of honest sounding information. Ed used to be one of the main guys in Steinberg. His article explained that the currently availble crop "steinberg" instruments were such mainly in name. He further explained that a solid neckthru maple headless bass actually sounded "better" than an orginal composite model. His recommendation was to buy one of 2 custom made headless basses (one of which he manufactured). Needless to say both of these were above my pay grade. His site also mentions that a Hohner headless bass is as good a substitute as you can get on a budget. I started reading reviews of hohner headless basses and didnt find anything that turned me off. I like the fact that the hohner bridge hardware is actually licensed Steinberg hardware. Its even cast right into the metal. So, I bit the bullet and ordered one from Ed Roman. It arrived a week later. They had adjusted the action to perfection. It felt just as good as my ric.

First off the B2AV looks cool (to me anyway). The one I have is a medium grey metal satin. It looks like a piece of expensive industrial hardware that got left behind during the last round of alien abductions. I love the mat black look and feel of the hardware, and the feel of the finely nurled knobs on both the electronics and the turners. Since there is no headstock and the body ends at the bridge then it is much smaller than a tradional bass. The hohner case that it fits in is just plain cute, about 1/3 the volume of a regular bass guitar case. The bass and the case are considerably lighter in weight too, which is a welcome relief. All in all the thing feels just really solid. Its built like a tank. Solid and no nonsense. Despite the diminuative overall size it still sports a 34" length and the nice low end that goes with that. I was very pleasantly surprised to find that the neck at the nut is hardly any larger than my 4 string Ric. I was worried about having adjust to a fat neck because of the 5th string. Not to worry. It feels great. After just a few hours practicing I got used to the closer string spacing. I did find that going from a 1.0mm pick to a .88mm pick helped to adjust to the closer string spacing. As I said above, the action is wonderful. Ed Roman guitars had adjusted it very well, but the basic design and construction had to be there for them to accomplish that action. No fret buzzing but the strings are still close enuff to run riffs as fast as i want. The electronics are quiet and the knobs well positioned for rapid adjustments. An LED illuminates when the active switch is on. The active electronics do not change the volume level from whatever the passive level is...this is very nice in my opinion. With the active switch on, the stacked knobs for tone controls both boost and cut. The response is linear and there is no suprise tone blossoming, a nice feature when performing. Also I should mention the fold out knee rest on the bottom of the bass. Makes it really comfortable when im sitting down strapless.

The one annoying thing that i noticed right away was the placement of the forward shoulder strap anchor. It is placed on the back of the bass where the neck connects to the body. This placement has 2 poor consequences: (1) the strap anchor pokes me in the belly!...yeah im kinda teddy bear shaped. (2) with the strap anchor in this spot it make the bass hang from the strap and try to rotate towards the floor, not far but enuff that I loose sight of the neck surface and only have the tiny neck dots to tell where my frets are. I fixed these two problems right away my moving the strap anchor to the nut facing plane of the upper part of the body near the neck. There is just enuff room to put the anchor there (like someone planned it that way ).

Once again, the bass is built like a tank. Its all maple. It feels very solid and I dont have the urge to cradle it or change its diapers. I still fear nicks and scratches to the paint, but that will pass. The finish is satin and not shiney, so wear will not be as noticable. One thing I found pleasurable was that when I first got the bass I plucked the low string still in the case... I could feel the vibration right thru the table. I laffed aloud in delight.

All in all I cant imagine a more satisfying transistion for a die hard Ric guy. The solidity and the feel of the neck and strings is close enuff to make me feel at home. I can honestly say that i doubt you can go wrong with this instrument.

Hohner B2AV
5
I purchased this bass from a local music shop...I bought it becuase it looks and plays like heavan...I paid £325

I like the way in which the stained wood changes colour in the light, the way that the curves and feel of the unit and stunning. The tone produced becuase this is a thru-neck is fantastic...Every nuance from a high harmonic to a powerful low B is pleasantly exaggerated throughout the wood.
Also the playablilty, the horn-less design makes all frets available and the body is balanced very well...


It can be awkward to tune (even though it does not need to be tuned often), as the tuning turners get stiff and lock when not used. Although this is a good feature to stop the Bass being accidently de-tuned, it can be hard to tune.

The construction methods were obviously good as the body is well balanced, the wood looks good with the stain.

Also the thru-neck design coupled with the headless design makes the bass a good toned piece of instrumentation.

Finally, i think that this unusual bass is a fabtastic buy. I have not regretted buying the bass since i picked it up. And i would recommend a Hohner (Steinberger) B2AV bass to anybody with an interest.