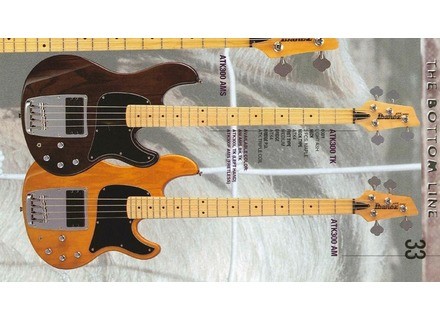 Ibanez ATK300 [1995-1999]
4
I note that this notice to the first version, made in Japan: Cache truss on the head with real and electronic components.
I really wanted to because I have a Japanese equivalent to 5 strings "made in Japan" which I could test the superiority of the last models made in Indonesia.

Having played a lot of his big sister 5 strings, I found my gaming experience (obviously handle thinner and lighter)

This is where it went wrong ...
I wanted (sorry to repeat myself) the equivalent of my 5-string model.
I thought I would make life easier for the songs "aggressive" does not require SI serious.
4 strings in this model was as close we can be: Same period and same production, same electronics, same strings.

Well quite clearly lacked bass, and general personality in the sound. When I played I felt nothing. It sounded not like my 5 string, nothing to do.
I'm not saying that the sound was bad, I say I could not find what I was looking for.
My theory was probably wrong: Casually between the 4 strings and 5 strings, the body is a bit less massive and less wide handle, and this necessarily influences the sound.

It was a GOOD bass. But she did not answer to my wishes, I am separated. I should say that I had a happy an Ibanez ATK Japanese resold at this time super-easy secondhand ...

vsoleil's review (This content has been automatically translated from French)

Ibanez ATK300 [1995-1999]
5
Made in Japan, 22 frets.
Low active humbucker.
Four knobs to adjust the treble, medium and low. Volume
a selector to choose which part of the microphone you want to play. Either alone easel, or nearly all the coils of the handle, what changes still pretty sound.

The concrete and mechanical hyper precise, often my bass does not Disagree repetmalgr between the metro, the car.

It has a sustain HALLUCINANTdu ever seen!

We can pass the strings through the body is fixed to the bridge's your choice
It's heavy but low enough so nice play. I can not get enough. His body allows wide enough to have good plate against itself.
The handle is delicious and makes a great precision even in wanders quickly and playing lots of notes. Access to treble is fairly quietly.
One small thing, the rounded top of the microphone is not necessarily great for playing doigtsmoi is the mediator, I am embarrassed Pasma same finger, it's just a matter of habit.

The sound is more oriented rock, but very versatile in its resolve many knobs.
Tone gerenale the sound quite modifiable allows slap, grunge and reggae (yes I swear).

I think it looks like a lot even when a music man. It could be an imitation, in any case it is close to this.

I use it for almost 9 years. She has a terrible mouth, really, this bass is beautiful and his own personality.
I jou lots of different styles with and I never managed to put it into default. In concert, the quality of my sound is often appreciated and I play often with no corrections on the amp, preferring the direct management of the bass.
Frankly report quality price is excellent, and I do it again this choice without hesitation.

It took me several months to find my bass. I've tried several, all makes and with a broad range of prices (for once I really sub), and I did not want a priori japonaiseje got a slap prices in the store . I'm not an idiot, I changed my mind

The book is beautiful ave a small manual that explains every knob freqence (blah), and especially with all the keys wool (cascricommeca?) To adjust the guitar.

All users I met contentsc'est are a wonder! It has character and you give as much love as what you give!

MonsieurBenoit's review (This content has been automatically translated from French)

Ibanez ATK300 [1995-1999]
5
Bass 4 strings, 22 frets.
Low active, but I rarely change the battery (good battery is more than a year).
The mcaniques are effective, robust (never change in 7 years), prcises and does not move hardly.
It possde 4 knobs (treble, middle, serious and volume) and a selector for the three microphones, the 3rd is perfect for slaps.

The handle is really perfect, not too pais, nor too late, the hand can slide over aisment (only default is the freight that gnent some slides during rapid and long). The strings do not curl as they are prs of the handle, which does not need ncessite finger muscle and give us great flexibility.

The interface is simple and ESG ever, remains low against the musician and gives acessibilt the strings without default. Access in acute is strongly facilitated by the dcoupe corp.
For me the three microphones in a block does not impede the game at all the fingers, I can rest my thumb on it unless I put it on the edge of the plate when I want to play more in the center of the body. Location of the handle moves away cre a standard for ease slaps.

Only default body weight, is solid wood it took time I muscle the shoulder and he often gives me the impression of being a prisoner of my strap. Anyway it flies over.

It is really a low trs polivalente, it should a lot of style. How many times have I not seen this MODEL in the hands of both African and when I use it with rgale in rock. I know even one that uses mtaleux! But all the while with its knobs and its slecteur, all with very wide variations, even when it comes hardly as a trs appropriate sound to metal. In fact I am not yet able to make out at the same time a hollow sound, heavy slap. But I am not trs useful.
Moreover, this is also his full strength as it allows even to a walking trs enjoyable!
The 3rd slecteur offers the most appropriate for slap: with good strings she slams dlicieusement.

I use it for 7 years, I bought it without knowledge and now that I have, I keep it at least another 7 years! I used that for the jou trs diverse in styles and I always t happy especially when I could compare it with another.
As mentioned above the default principal is its weight, qualities for cons, it's everything else.
But the most surprising is its price quality ratio, I could sell it the price aisment nine cd 600euro. In addition I have often heard that there are pros said low numbers to double this price that do not equivalent! They taient first tonns.

Everything that if you are looking for an exellent low, with the personality of your budget not Exceeds 1000 euro and you have the opportunity to meet him, Do not hesitate! Not to adopt it would be a matter of taste between objects impccables.
Having said that from 1000 euro, one can find much better bass.
Did you find this review helpful?yesno
»

becbunsen's review (This content has been automatically translated from French)

Handle fairly large but very pleasant, easy to play
spacing of the strings makes the slap (she does originally designed for the bassist of spin doctors), but does it all
equalization very versatile big sound to go with her to infrabass metal without touching the amp

It is true that the inspiration is hardly musicman cache (This is a good reference)
the sound is quite powerful but always Dfine and never aggressive (always a certain roundness even in the treble)
very versatile, the only sound that it can be difficult is the sound a bit hollow lightweight with infrabass (style bass) can be achieved with a good jazz bass
any way, we never managed to tie a musicman a jazz bass, it's just completely different
In any case, in his role, the atk 300 is really great. the sound is always flattering and
It's easy to play

I use it for 3 years after having had a atk 100 (the transition to the 300 worth)
I buy a no hsitations
I find the price Excellent quality report. I find again that it is an instrument that has its own personality without making too much aesthetic references to things existing.
Did you find this review helpful?yesno
»
Read the 6 user reviews on the Ibanez ATK300 [1995-1999] »