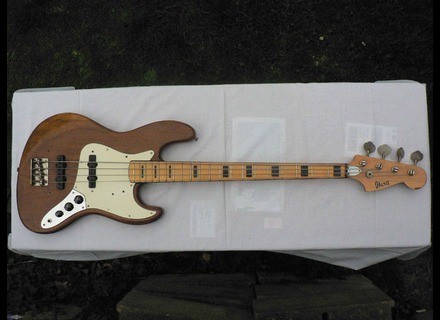 marlonebranlo's review (This content has been automatically translated from French)

Ibanez 2376
5
Japan in the seventies (76)
20 frets
2 microphones + 1 tonalittrs ffective)
Jazz bass bridge
Channel vintage button opment.
Fidler C'tait copies of Fender's best era, factory by highly skilled luthiers.
My luthier in the rvisant said he was impressed by t finishes and manufacturing techniques of the era that had nothing do with current standards.

The neck is very pleasing, with clear boxes and its representatives for the visually impaired, it ensures the highway (especially bad on stage clear).
I played in on Ibanez ATK (Japan 96) and I think I managed to join the two LATEST freight easier, but is not a very long time since I played with my not repres are not ultra aiguiss.
The shape and weight is the same as Fender.

Sound, then l! MAGIC !!... ... It's simple, you take the best of the era Fender U.S., well, it's the same ...
Not for nothing that made mountains of Fender Ibanez procs, since those copies taient as well, so much better because less CHRISTIAN (though I imagine not give either the era).

Like a true Jazz bass, ranging from a slap at the Primus Big Dub through everything that can be hurl through Gainsbourg (the sun), basically you put away your active (something I done).
I play bass and Ampeg SVT OverDrive Boss c'tait really well with the ATK, it's even better with the Jazz Bass.

THE FIRST RPTE ds, I had almost in hand and I felt like playing with for ages.
I asked my guitar to play to show the form it could have on someone, after five minutes, he was so off on another plant, it had envoutle sound is truly magical).
Yes, I had some low, but I have long played a Guild 77 and since 2000 on ATK, I also have a home for Thunderbird.
It is now 20 years since I played the Babasse and I think more and change.
The price is something subjective, since they are rare models.
But they did not they mritent the coast, so by dbrouillant well and with a little patience you can find one less than 500th.
For sure, this is THE BEST 4-string instrument on which I played so far.