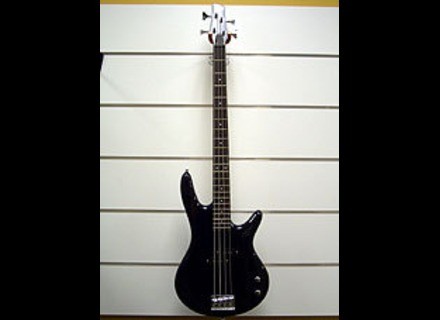 Ibanez SR100
4
The Ibanez SR 100 is a beginner's electric bass guitar. It is a really simple bass, as there isn't all that much going on here. The SR 100 was made in Japan and has 22 frets on it. It has a single, P style pick up, with a single tone and volume knob to control your tone. That's pretty much it as for characteristics on the SR 100...

Playing the Ibanez SR 100 isn't the most enjoyable thing in the world in terms of playability, but it is certainly playable. The neck doesn't have all that fluid a feel to it, but it's still easy enough to play up and down the neck and to reach the higher frets when needed. As far as setting your tone is concerned, being that it only has the single pick up and tone and volume adjusters, no one should have any problems with this. A manual won't be necessary under any circumstances.

The sound of the Ibanez SR 100 is a bit below average when compared to the entire spectrum of basses out there, but for basses in the price range, the SR 100 sounds pretty good. There isn't much flexibility unfortunately, but what can you really expect from an inexpensive bass like this. I would generally leave the volume and tone knobs all the way up, which gives you a punchy bass sound. Rolling off some of the tone knob will give you a bit more of a subdued sound. I've used the SR 100 for practicing, mostly with a SWR LA 15 amplifier.

While I wouldn't recommend the Ibanez SR 100 for anyone other than a beginner, for the player who is just getting started with the bass, SR 100 is a pretty decent instrument. It's definitely an entry level bass and nothing more, so don't expect too much from it, but if you're looking for a really cheap bass that is actually playable and has somewhat of a decent sound, the SR 100 is worth a shot. I'd also recommend the Ibanez SR 800 for beginner/intermediate players. I'm pretty sure that they've discontinued it, but it should be easy enough to find one if you're interested.
Did you find this review helpful?yesno
»