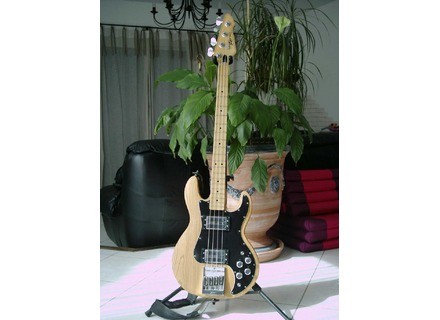 Peavey T-40
5
Everything has been written in previous reviews. Mine has a rosewood fingerboard.

It is indeed quite heavy, you need a good strap. But it is perfectly comfortable to play with.

The neck is thicker and rounder than the one on my Luthman, but you get used to it.

The sound: powerful, brilliant, particularly rich in mids but the lows rock as well, the amp always asks for mercy. Imagine playing a bass equipped with the strings of a grand piano or a Hammond B3 (the real one, not a clone) ─ that's the T-40, more or less. A very full sound, very vibrant, percussive and rich in harmonics. But also very versatile, depending on the settings: With the neck pickup and a bit of EQ you easily get a huge but very muffled sound, like Jah Wobble.

You can watch on Youtube a video showcasing the different sound possibilities this bass provides, and how to use it to imitate a Precision, MusicMan or Rickenbacker. That's all very interesting, but this bass always has a particular sound. That said, I don't intend to sound like Chris Squire playing with a pick, but with the "Rick" setting you come pretty darn close!

I have a somewhat run-down 4*10 cab with a speaker that crackles if you play a bit loud, at least with other basses, but not with the Peavey, even at the same volume. Always that harmonic richness, I think.

I bought it right after a Yes concert where I was blown away by the sound of Chris Squire with his Rickenbacker. It had more mids and harmonics than with his other basses. Reading different forums I discovered this bass, which seems to be the closest to a Rickenbacker and it is highly praised (although there are people who don't like it...).

The word "awesome" is a bit trite these days but there is no other way to define this bass. Big, beautiful, heavy, dense; the output level, the sustain and the sound: It's awesome. Compared to my Luthman Jazzette, it's like driving a Land Rover and a sport coupe.

You can find it easily on Ebay, it's a great American vintage bass at the price of a secondhand Fender MIJ. The cherry on the cake: You won't go unnoticed on stage.

I love my T-40!
Did you find this review helpful?yesno
»

I've used this bass when playing in a reggae band as well as in various rock ventures. It has a very full and rounded tone with a fantastic treble edge with the tone rolled all the way on. Roll the tone back a bit and it maintains a very clear but deep note. Overall it has an almost piano-like sound that I palm-muted for most of the reggae recordings. I have not used this bass for my jazz recordings because of the wide string spacing and the dexterity required.

This was acquired as a hand-me-down from my Uncle - a birthday present. As far as I've seen these basses run for something like $150-$250 depending on condition. The Natural finish usually runs on the higher side of that range.

It was my first bass at the time, and I've owned it for about seven years now (My Uncle owned it for another twenty-some years, and it still survives in very solid condition.)

I enjoy the near-crystalline tone of the bass and the wide spacing of the pickups for a wide variety of tones that I can get by turning each pickup's volume up or down, panning between the two. The bridge pickup almost has a Jaco-esque midrange bumb with the tone fully on, too, something I would never expect out of a bass with such dark wood and warm neck pickup. Both pickups are incredibly responsive to your finger stroke. All the better to hear bad technique in your fingers, as well, so don't be frightened if it takes some getting used to to start playing it and getting all these sounds. The sensitivity will eventually become your best friend, as the subtleties, piano-like tone and almost vocal expression are not only possibilities but even available at muscle memory recall speed.

A fantastic-sounding, well-rounded, and wonderfully expressive bass. Not only a jack but maybe a Queen or King of all trades.

I find myself wishing for a 5th string now, although I didn't when I first got it. Now that I'm used to 'normal' 4-string spacing, this bass seems quite wide when I come back to it and takes some getting used to.

Not only is the string-spacing wider, but the bass has a long-scale neck, and the spaces between frets are wider, which can be taxing on the hands for long repeated riffs (such as Golden Earring's jam in the middle of 'Radar Love'). In the lower positions, because of this, I generally resort to a three finger technique in my left hand reminiscent of upright technique to make playing easier. This is probably my greatest complaint with the bass.

As a minor note, I find the sound with the phase switch in the 'out' position to be on the tinny side, without much foundation to the sound. It's still worthwhile to experiment with, but it's not a 'bass' sound, more of a lower-pitched guitar. This is both good and bad, and either way it's an extra sound to be played with.

I don't find the added weight to be a bother (it's also one of the sources of the instrument's large, round tone), but then I'm only 21 and back problems are a long way off, I hope. I can't speak for the older generations.

The model (and the brand in general) has a rock solid reputation for rock solid construction. Peavey basses and guitars seem to always be referred to as 'tanks,' and although they do weigh a bit more than their counterparts, Peavey has generally more than made up for the added weight in beautiful tone and with an instrument that can take a serious tumble without nary a scratch.

Pros:
Beyond solid construction. It's a tank.

Beautiful, expressive, warm tone in the neck pickup that gets a Warwick-esque growl when attacked strongly. SIZZLY slap tone!

Biting, midrangey sharpness in the bridge pickup reminiscent of Jaco.

Overall range of tones, each done quite well for a cheap bass with such variety.

It's CHEAP: Usually around $200. I guarantee you won't find a bass that sounds this good under $500 new.

Northern Ash is a fine wood.

Cons:
It has been called 'weighty' and 'heavy on the shoulder' by some, although I don't really notice.

I feel like in the right situations, this bass makes a fine choice. I play it in rock groups, reggae bands, where not a lot of jazz or fusion-esque dexterity is required (a la Stanley Clarke, Tal Wilkenfeld, etc.). Lines in the vein of The Who's Jon Entwistle or Zeppelin's John Paul Jones are still very reachable and sound particularly great on this beast. I would give it JUST shy of a 5 because of the string spacing issues (perhaps a 4.8), but in these situations, it really shines as a fantastic instrument with few equals.

Peavey T-40
5
Purchased New in 1982 for $295.00 had it special ordered from my local music store in AL. I was living in Meridian MS in 1978 and My father was given a blank guitar body noting its construction and being familiar with the Peaveys (having had one of the daughters for a student teacher), I wanted one of the bass guitars.

I like the fact that it is so solid and came with a molded case almost indestructible. 22 years later it still plays as well as it did new and almost always gets a complement on its tone and appearance. Adjustments are easy, hardware is sturdy and over all was and is a great value.


Although it has never gained the notoriety of the Fender line Peavey has made some Great instruments. The T-40 was made in the United States and the quality of engineering and construction show. It is an excellent bass for any ones arsenal at any price.

I have 3 other basses wich include a fender usa p-bass, a godin sd bass and a ovation acoustic bass. This bass is on the HEAVY side but the tone blows away the competition, especially the lower register notes. This bass is built Abrams tank and doubt it will ever need hardware replacement. Electronics are top notch, and like I sed...TONE, TONE, TONE.

Except for weighing an astounding 11 lbs, there are no dislikes so far.

Its built to last a lifetime and then some. Will be around for future generations of rockers. Quality thru-out. The bridge alone weighs more then some low-end basses (just kiddin) but you all now where Im coming from if youve ever pick up on of these BADBOYS.

All and all, a fine bass with megatone and quality components. If you ever see one for under a couple hundred bucks, pick it up by all means, even if you dont play bass or guitar at all. Its truly a diamond in the rough and will become a much sought after axe after everyone finds out how great these workhorses are. you will double your money back with ease. This bass is the real thing, a heavyweight champ...literally!

This review was originally published on http://www.musicgearreview.com
Did you find this review helpful?yesno
»
Read the 8 user reviews on the Peavey T-40 »