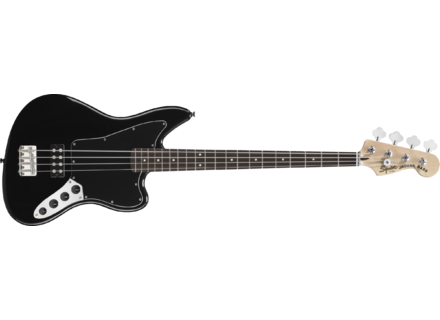 TomPDB's review (This content has been automatically translated from French)"If you need a low pass everywhere, this is the one!"

Squier Vintage Modified Jaguar Bass Special HB
5
-In which country she made?
Indonesia!
What type of bridge?
The Standard in the vintage modified series (which is not tip top)
What type of race?
Handle jazz bass.
How many frets, what kind of microphone and their configuration?
There are 20 frets and pickups: precision bass-splite single coil for the neck
Jazz Bass single-coil for the bridge.
What are the settings?
While it is active, so it is not complicated:
There is a volume control P Bass, J Bass volume, a bass boost and a Master Tone.

So I would say that in general it is pleasant played, the handle is the Jb so we began to know, that is to say adapted to any type of hands played and enjoyable.
Otherwise it is not a heavy bass, so it can get a little toy for some, but the advantage is that you can play with 4h standing without any pain (tested and approved), so good for once a low not refile us back problems.


View that it is a short scale, anyway access to acute is quite limited, but yes, (little) treble that was is enough (what a 21 frets was nice, story to not stop a Re # on the G string, the mid missed me some time), it has only one string frets on the neck and body, but it is easily attainable, unlike a certain low or has it&#39;s downright 4 frets after the body, so the latter are unusable).
It is therefore active in sound is correct, the difference precision / jazz bass is present and it just easily swap (not against the two mixed together gives a sound a little metallic).

Yes, it&#39;s low I needed, I went little by little funky in my time, keeping my roots a little punky, so it acted as a good compromise.
Jb sends sound good at medium, it is against a little low on the treble (it feels like a little slap on, even if she is doing very well in this way to play)
Pb sends sound good at low, also mean that, but the highs are (still) better than the jb. on the other hand, no means slapper in bp mode, the micro sends Retro bass sound and it does not slam enough.

Otherwise I play with a TC Electronic BG250 115 inches, and with TonePrint (including a compressor for the slap which is not bad), what comes out is a round, warm, even with medium heat pushed this one feels .

You will understand, I am an amateur micro jb, moreover now I do not play with that when I play the home alone. But sometimes I have to put the pb when I found a play a sound that requires less precision (an oxymoron aileurs, micro precision less precise: D) or more bass even if my amp gives me a lot already.
But do not put all the knob thoroughly, it really is a metallic sound that you expect.

So I use since the end of October .. November so going say, until now .. which is .. many months! not seven months into reality.
I tried to time a jb in the same series and cort not top (the evidence, I can not remember his name ..).
What I find great is that it takes really really good tuning (one week), the sound is pretty good, with different sound and not complicated to find. By against the bridge is rotten, but it&#39;s fender, you never know what goes through their heads ..: ° (and I would not change it for one quarter the price of the bass).
Oh also, the side played bothers me a bit I think, but what weighs view point, I must make this sacrifice (toy or not played, that is the question).

If I had to mention the value for money ... Extraordinary is simply stunning, it is just as well as low costing twice! really, in this article I criticize, I criticize, but it must be remembered that it costs only 230 euros!

With experience, no I do not have that choice, because now I no longer need the sound pb I play almost rock requesting his bp, but then, so really if she does its job.
It is a low false beginner, because it was one year I was the bass when I got it, now I think I ought to have quality over as principal bass, but any the way that I keep as a low pass everywhere). Today if I would have known I would have the jb the same price range.

If you need a low road that you&#39;re not afraid of damaging, you can make different sounds (either bp or jb short, what normally need a bassist! (If the players ibanez, warwick and musicman will smash my head)) and cheap, go for it!