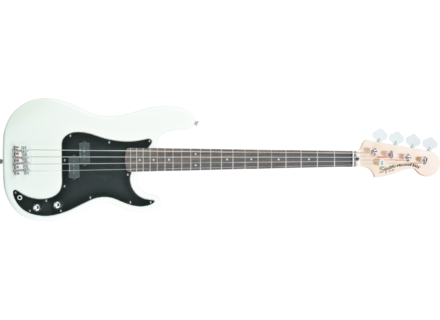 Squier Vintage Modified Precision Bass
5
I play the bass since I was 14, it was my first instrument. Now I'm 52 and since a few years I started to play again. I play in a coverband and in a schoolband. I like all different kinds of music, but soul and R&B are my favourites.

I bought the guitar new in a musicstore and paid 300 euro. I read about the Squier Vintage Modified series in a guitarmagazine.

Everything! This instrument looks good, sounds great with the Duncan Designed pick-ups en plays smooth. Being vintage myself I can ashure you it sounds like a '60 Fender Precision. The neck feels great and the construction seems built to last. No sharp fretends, stains or cheap materials used.

It's delivered without the chrome covers. I bought these myself as well as a thumbrest and a tortoise shell pickguard. Now it looks even more vintage. The action was a bit high, but in the store they adapted that. In fact no problem, because these alterations are very personal.

As I said: the construction is very well and the quality of the used materials is good. The intonation was perfect en the neck was straight.

For this price you better think twice not to buy this Squier. The sound fits good in the bandmix, the bass plays very smooth and it looks good. No wonder the readers of the magazine BassPlayer choosed this Vintage Modified serie as best buy of 2007.

I bought this bass to rock and it sounds ... We can easily have a well rounded sound like a sound that "slap". I played on a Markbass CMD 151 and a Gallien Krueger Backline 112. Should not take the lead: it throws

I used a little over a year and a Fender Jazz Bass USA appeared and blows, it does not really served. I sold it for lack of space, but also to buy a more expensive active low. It sounds good (too much??) For a Squier. Although this is not a low-end model, it does not expect this quality Squier (I was disappointed more than once). Once passed in the luthier to change the strings and set the string height, we can not be a Fender PB but it is not far ... Value / price indisputable (or so I'm really come across a pearl). A repeat: without hesitation! I feel that one day or another, I regret ...
Did you find this review helpful?yesno
»

StAmp!'s review (This content has been automatically translated from French)" Correct for a very low very taken proper"

Squier Vintage Modified Precision Bass
5
GOOD! This bass is made in China or Korea I do not know but it is too far from the American model for sure (which are also much more expensive etles finishes are a bit sloppy but far from unbearable). One might regret the number of frets (20 total) but this is how models are made "Precision". Simple and effective settings, a tone knob and a volume ... nothing to lose

This being said follower of "simple and efficient" My choice turned to this bass.

I had other basses before (an Ibanez, Epiphone one, a Washburn) and I loved the neck, neither too flat nor too thick PERFECT!
I really like the design of the P-Bass at first, but then more white and black is not current and is reminiscent of a Sid Vicious, in short! Very pretty.
Access to acute and a little complicated but that is all the same P-Bass: the heel between the handle and the body is for many.
Sound: My opinion has little value because I love his P-Bass pickups and the Duncan disigned restores Well, I think the sound and quite warm, although with only two knobs was not a wide range sound, it is the P-Bass sound very versatile.

It has a clean, well defined, with a good attack (perfect for rock, and other music that slappeurs tap). Tickling in the amp settings you can have a full and its relatively heavy, or lighter and fluid. For me I done by Punk Rock / Grunge, I currently play on Ashdown combo (but I will soon change) I try a combo and a head Ampeg all complemented by a delicate Big Muff and many how to say ... SEVERE CA OATS! You can do anything more with such a low.

Gonna do now 1 year that I use it, I had no problem but then no (reliable gear), I'm tired and I do not know if I get tired one day. I have not tried it I knew exactly what I wanted. What I liked it or not: I loved almost everything (sound, look, reliability, simplicity and so on), that I have a little less like they are finishing the Barbarian (the pickgard incorrectly fitted, the varnish on the handle of average quality).
In any case it is only positive, absolutely no one loses money by buying this model I recommend it to any beginner bassist and even those who are starting out and touch that did not necessarily want to leave 600 € -650 for an entry-level model P-Bass Fender.
PS: I'm not the maximum, because nothing is perfect and even if it is a good bass can still get better, but still ...
Did you find this review helpful?yesno
»

fab_a51's review (This content has been automatically translated from French)" VERY satisfied with my purchase!"

Squier Vintage Modified Precision Bass
5
As specified on the back of the head: "Crafted in Indonesia."

Maple neck, 20 frets, 2 pickups "Duncan Designed" prepared according to the standard Precision (no buzz, no problem mass or otherwise, you can push the volume of the amp!), Easel identical (in appearance only? ?) to the model made in US "American Special", and two knobs (1 volume, 1 tone).

Channel super nice (although the original set on the one I bought), and I would say much more than many US models I tested before buying it.

Ergonomics are good, classic form Precision, nothing special about the weight except that it is a bit lighter than US Standard.

No differences in access to acute in relation to standard US model.

A small adjustment of the bridge quickly, and it is nickel. The sound is in my humble opinion very very similar to that obtained with a US model (in-store tests on the same amp without changing its volume, all the knobs of the bass in background).

To go a little deeper about the sounds, the bin is simply the Precision what?! I'm just the studio was working on projects in various styles and this bass gives me satisfaction when I need sound Precision. I get the fat you want, and what each of the strings in any position on the neck and slamming the distinctive (especially for the game with a pick).

I am not doing my last one taken of her with POD X3, and it sounds like hell! Who still had a chance to use it in an amp (Ampeg), I can tell you that we still retrieve the correct serious in this case. It hums to death!

I use it for several months now and am fully satisafait with my purchase, and all for $ 363 including taxes which is about 279 Euros.

I have tried many models, and frankly I really do not find useful to 4 times that price for a made-in-US (they are sold at around $ 1437 taxes included here in Quebec, which is about 1100 euros). I tried the other models in this series "Vintage Modified", as well, whether the Precision or Jazz Bass. I really wanted to handle all maple (without added touch), so I chose this model.

I also tested all models of the "Classic Vibe", and it's frankly stunning ?!?!?! I plan also to do well the acquisition of a Jazz Bass in the series to complete my set.

The value for money is super good in my opinion, but I still want to add that some of these bass I tried were well assembled, well finished, and some not so ... So feel free to bring out all its stock to the seller, the same test several low until you have the feeling of having the right hand.

NOTE: Also check an eye and an ear on guitars Squier Classic Vibe Series, same story! They are really bluffing, so I paid a Stratocaster and a Telecaster.


Wishing you a lot of fun,

Did you find this review helpful?yesno
»
Read the 10 user reviews on the Squier Vintage Modified Precision Bass »