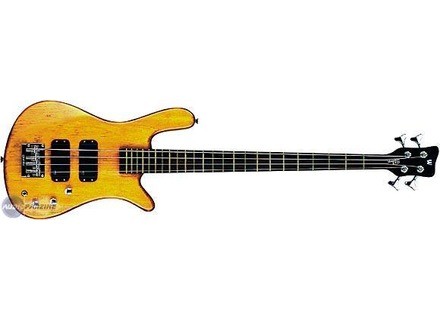 Warwick Streamer Standard
3
Mostly play in a duo, with "Ms Diva" on vocals and KB. Play old stuff, small room, not loud. Otherwise, enjoy some old rock and roll, gotta have the "roll', tho .....

This 4-string is a replacement for the 5-string version I parted with about 10 yrs ago. I had loved the sound, but not the Warwick 5-string neck. Most Wick 5's are mizrizzable, too narrow and too thick.

It is mellow without being dull. It's rich, but not overly bright [this is not a blonde joke]. It also has a fail-safe passive bypass that will play without the battery.

I do like the thick neck on the 4-string, which has normal string spacing [the 5 was too tightly spaced]. The upper strap pin is opposite the 12th fret, so balance is great, even with the big neck.

It has a PU pan knob which I like much better than dual volume knobs, It's a dual humbucker, my fave PU config, and the PU's seem well located to render a rich tone. Even tho its features and materials are nothing like a P-bass, it can do the P-tone better than a Fender, yet there's much more avaialble tones.

The E-string tuner post is a good distance from the nut, so you don't get a lotta fat main winding wrapping around the post. The nut is adjustable, very good feature.

PU's are on springs, much better than simple pads, very adjustable. Truss rod is double acting, another excellent feature.

The 2-band EQ is a stack knob. I find those to be risky, damage-wise. The carolena body dents easily, altho at least it's not under one of those glossy opaque "automotive" finished that emphasise every minor dig and ding. Minor dents kinda blend in with the natural grain pattern.

There's no seperate battery rout, or even a clip in the main rout. The battery is just tossed in loose [dumbast]. Add a little foam and it's OK.

The undoubtedly worst thing about any Streamer Standard is the very low output. It's adequate, if you have a decent, not too noisy, bass rig. Output is lower than you prolly think I mean when I say it's low. And it's even lower than your now-adjusted thinking. It is, as I said, "adequate" which means "the first useable step above useless". However, it has a very rich mellow tone that is hard to get from other fretted basses. An good small outboard pre-amp, like is used for an URB, is not a bad idea. For some players maybe a necessity. It's a negative aspect but not a deal killer if you really like tone
f this ax.

It's a typical Warwick except for the bridge, which is some POS but serves OK. Typical ick means no finish, except the wax you apply periodically, which I never bother with .... I prefer oil. Neck is ovangcal with a wenge FB, double acting truss rod, and brass frets. Looks and sounds cool.

There's a zillion basses in this price range, and this one is not suitable for some of the modern tastes or playing styles. It's not even made anymore. It works best in tha same contexts as an URB or a plugged in AEB. If you play in such a context, and you encounter one of these for sale local to you, don't pass up a chance to check it out.

It's a niche market thing, now discontinued, and since all its shortcomings would condemn it if it weren't for its unique attributes, I'm going to rate it '3' on the '1-5' scale. But I wanna emphaise that this is not a "3 = mediocre" rating, where everything about it is mediocre. Quite the contrary, so much of it is either a '1' or a '5' that, by the numbers, for a single-number rating I'm stuck with the '3'. IOW, if you don't love its peculiate attributes, you'll hate it.

Warwick Streamer Standard
5
I bought my warwick in a local store near me by the price of $1099. I bought it firstly because the bass players who I admire have warwick basses. This is the model with 5 strings, double pickups.

For it's price in my opinion there's no rival, and the sound is adaptable with all sort of styles. The notes sound so clear that it's like a dream come true, and the sound of the higher strings make's you almost think you're playing with active pickups. I think it's very light, at least lighter then some guitars.

It doesn't have active pickups, and because it's soapbar pickups it's very difficult to find a compatible active pickup to replace with.

It's very well built, I have nothing bad to say about his construction or quality.

At his price there's no rival, clean good sound, compatible with all sorts of music genre, starting with metal and finishing in jazz. Very good for intermediate and professional musicians.

Warwick Streamer Standard
5
Bought at SMC in England, £549 coz it was highly recommended

I love the sleekness of the unit, it's so smooth! I also love the wooden finishes, the name engraved in the bridge and the changeable nut. But most of all, the sharpness and clearness of the sound. It never buzzes if you play a note wrong, the sound is perfect!
Also, the feel of the unit when you put it on enchants you, so to speak.

Honestly, no joke here, I haven't found anything bad about it whatsoever yet!
Except thet it's QUITE heavy, but who cares? It makes up for all of that with everything else.

The construction is so perfectly done, it's so smooth and the woods are so sleekly put together you'd think it's all one big piece of wood! There is real quality sound coming from here. It's been very carefully designed.

If you are entering the intermediate bass league, then this is the bass for you! It has incredible value for money, and sounds incredibly crisp.

Warwick. The BMW of the bass world.

darrycool's review (This content has been automatically translated from French)

Warwick Streamer Standard
5
Low made in Germany
Channel 24 cases
2 passive humbuckers
One for each volume and tone.

Handle very pleasant, fine and smooth.
Access to acute is no problem because the body is cut.
Low fairly heavy but inspiring in the quality of the wood gives a blank sound warm and round.
Low well-balanced, you do not spend his time having to adjust while playing.
Adjusting the string height is by the bridge but also by the nut at the top of the handle, which allows a very precise adjustment of the strings and so much parallel to the handle along its length.

The sounds are very "clean".
On the micro serious sound is round and the sharp sound is drier.
Both pickups together have a tendency to sound rather close to the grave but still different.
The knob tone control, as is often not very effective on the first 3 quarter turn it nothing happens and it is on the last quarter we spend a bass sound stifles clear sound.
But anyway it is of little importance because I have an equalizer on my amp knob so it does not really helps me to refine the sound and I put it always has its maximum.
Otherwise as mentioned above this bass has a good sound and good sustain a vacuum probably due to the quality of the body.

There is only one week I use it but I hasten to notice because I have a serious lack of info on this bass before you can try and be convinced to buy it , so if someone has questions above and many ca there is an opinion.
About me there are only 3 months I do the bass (after 14 years of guitar anyway), and that I was offered to start with is of very low-end so it is obvious that this streamer I was more than convinced.
But all I can say is that this bass has a great look, it is very comfortable to play and a well rounded and warm, it is more precise than ca either at the neck and frets, at these settings, or in sounds and gains of the microphones.
Short of getting started breathing this low quality, being more than one model at end of life, well I got a great rate so if anyone hesitates and well just try to be convinced!