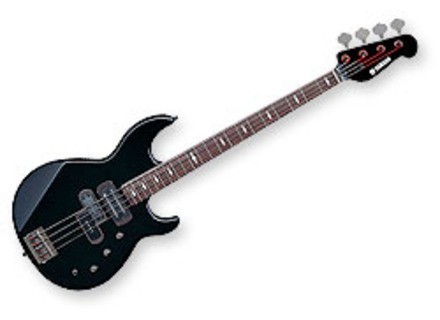 BB714BS, 4-string bass guitar from Yamaha in the BB series.

Anonymous 's review (This content has been automatically translated from French)" the alternative!"

Yamaha BB714BS
4
made in Indonesia
the bias of this bass, it is placing a very humbucker in the neck, which, with a pitch to zero and the bass boost engaged, the bass can get very powerful and profofs. to repeat, I am sometimes Arriv gourrer a semitone so the sound is round. impressive. it is the most versatile mic, which reveals its qualities in the midrange when increasing the tone. bass boost off, we are still closer to the microphone simple it remains confined to mediums. combining the two is interesting with the tone at background, push-pull to switch from one register to another sound.
I think that with a fingerstyle mics do not restore the slamming that one feels "empty". but if you slappez, or play with a pick, I think we find it easily.

it is a massive and heavy bass, happily balanced. the handle is not what is becoming an end, but it suits me. the key is superb, with a set of nine strings, slamming it as failed and vibrato are easy to get out.

I play heavy rock, but I hit a lot in the soul / RnB of 60 and 70s ... my two guitarists tend to play very serious, but with my bass boost, I am more than tranquil. and I have a terrible amount of output!

I play for two months, I bought it after testing its competitors in Cort, GL, Ibanez (not ATK series, however, I should have) not yet tested Fender.
I took it for ease of configuration for the solid feel it gives off. GL I tested looked like an airplane cockpit with its knobs and switches ... For the record, when I took the yamaha, I immediately heard the slamming of the instrument, and very good sustain. I chose at that moment, before connecting ...
the price suited me, but in principle it is sold more expensive, perhaps did more harm to defend themselves against the 700th model.

I sometimes regret not having the bridge pickup, but good. I will keep a long time ...