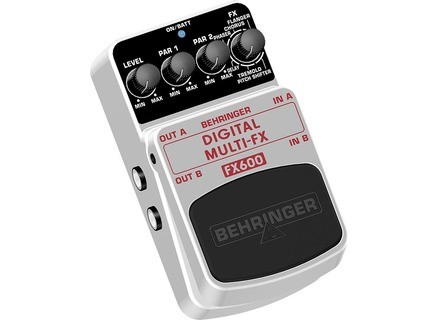 Behringer Digital Multi-FX FX600
4
SOUND:
The all-digital Behringer FX600 offers six different effects at 24-bit quality. Not only is the sound high resolution, but you can hook it up in stereo for true left/right channel imaging. The YouTube video below demonstrates the different patches at different settings, playing both clean and dirty:

A big plus is that the sound quality is crystal clear. The ‘quality’ of the effects is very decent for the price of $39.99 USD. In that regard, the Flanger is not as good as a dedicated $150 flanger, and the same is true for the Chorus, Phaser, Delay, Tremolo and Phase Shifter. But if you use the odd effect the odd time and you’re doing it on a budget, the FX600 is a solid investment.

OVERALL IMPRESSION:
Some musicians may consider the FX600 as an entry level pedal, particularly those long in the game and collecting pedals of all types and qualities. Although true in one regard, for $39.99 USD it produces some very decent sounds… and they are crystal clear to boot. Besides the clarity, I actually like the digital sound of these effects… there is something very futuristic and machine sounding. It may be suggested that the sounds are the result of less expensive guts or electronics, but it actually is part of the FX600’s charm. If you’re into ‘Industrial’ Metal, then you very well may like the FX600 for the ‘edge’ it offers, whereas others will like the pedal for its superb clarity and price point.

EASE OF USE:
There are other multi-FX pedals on the market, such as the Dr. Scientist BitQuest, and typically thyy tend to operate in a similar manner. You decide what effect you want with the FX Selector knob (far right): Flanger, Chorus, Phaser, Delay, Tremolo or Pitch Shifter. The LEVEL knob (far left) dictates the degree of mix or how much of the effect you hear. Around 12-noon and the effect is very audible, whereas 9-o’clock you can faintly hear it (a subtle effect)… and turned up full produces full effect with no dry signal. The other two knobs play different roles, depending on the effect chosen. When choosing Flanger, Chorus or Phaser the PAR 1 knob affects ‘speed,’ whereas the PAR 2 knob affects ‘depth.’ When choosing delay those knobs control ‘delay time’ and ‘delay feedback.’ When choosing Tremolo those knobs control ‘speed’ and ‘shape’ (LFO waveform). And when choosing Pitch Shifter the knobs control ‘detune’ (slight shifting for a fatter sound) and ‘semi tone’ (pitch interval, e.g., 3rd, 5th, octave, etc.). As stated, some effects are barely audible with both knobs at 9-o’clock (e.g., clean guitar and the Phaser effect), whereas others are very audible (e.g., dirty guitar and the Flanger effect). Consequently, 10-minutes of experimentation will help you to zero in on how the effects are used best.

RELIABILITY & DURABILITY:
The FX600 can hold up when gigging, so long as stomping is kept under control and the pedal board is not abused during transportation. However, the FX600 likely is best suited for home playing or those on a budget as the housing is made of plastic (with a rubber topper where the foot stomps to switch the device on and off). The knobs feel solid enough and turn smoothly. The four knobs and the small LED are on a lower level than the foot switch, and so they would not be in harm’s way. All in the inputs are along the side of the pedal, which makes sense since there are several (two stereo in and two stereo out, besides the power input). The inputs and outputs are set much lower than the foot switch as well, making it difficult to produce any force on the cables with regular use.

Zoupioupiou's review (This content has been automatically translated from French)" This is the Behringer ...."

The manual does not serve a much
Branches you and you play
2 buttons for effects settings, but it remains limited in view of the proposed effects is almost enough.

Purchased to connect to the database on my keyboard, multi-effect pedal in my finished board.
I need a phaser and a flanger.
I finally opted for a hand phaser pedal and I use the flanger chorus instead of
When the flanger is switched on, it was soon felt putting his amp in a tin
Effects are difficult to adjust and it goes quickly lollipop
To my taste, the tremolo is only the road
Maybe the pitch shifter but I'm not a fan of this effect.
The light is blinding but at least it illuminates the pedal board ...

If you are looking for a multi effect that name, save some money on your way.
The ideal is to operate with a power supply outside
As usual with Behringer, inserting a cell can not be returned without a tab crash or a screwdriver in hand.
It's pure plastic, generating a slight adjustment knobs and a painful misalignment easy, no tap tempo delay, difficult to have a positive opinion for this pedal.
Now, buying Behringer, we also know what it starts in
It is not very expensive and it feels necessarily somewhere

frankyp's review (This content has been automatically translated from French)" Cheap, not terrible"

Flanger and chorus rather Cheap! (3/10) I think, but I am using a delay of sometimes as a tremolo, octaver and harmonizer or (7/10), adjusting my best.
Small enough to use me ...

It helps me for 3 years, and even though its blue light dazzles me, this is not the case of sound!

Anonymous 's review (This content has been automatically translated from French)" in the studio, warm"

Simple to death reading the manual and hop,
memo, if the manual tu is the translator that is cheap!

means
we are in the mid and low range,
appreciate electro sounds, the bass, fuzz, country,
others spend their way

since qq days used,
combined with two bullets: the led, as all eyes led behringer pete
prick nail polish to Madame, one brush stroke and chti hop, going from 13,000 lux to 100 and ...... Above all, you pay a SPOT COMBO pedal power as the battery burns to eye saw it, too consumer electronics
Did you find this review helpful?yesno
»
Read the 10 user reviews on the Behringer Digital Multi-FX FX600 »

Other Behringer multi-Effects for Electric Guitar