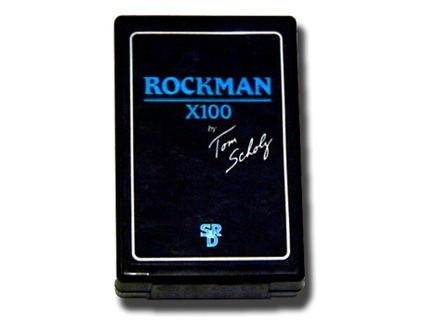 Rockman X100
Between a guitar, a Low Level output which also Aux input.
2 mini headphone jacks.
For pushbuttons there are 4
-The On-Off with her red LED
-The Volume: Max -5 dB and -10 dB
-The Slecteur sounds: CLEAN1 clean2 Edge and Dist (max saturation)
-The Effects slecteur 3 positions: either Chorus or Echo, is in the middle 2
+ A tiny gain knob to the rear.
At the rear there is also a leg to hook the belt x100.
Below the hatch for 8 LR06 batteries, do not forget to dye!

The push buttons worked very well at the beginning, and then become hard to handle
and it is difficult to position on the right cran.En Basically it's crap these buttons.
The gain knob to the rear is very efficient.
The CLEAN1 2 and Edge are the positions that I have used the most, Dist really is too saturated.

So my impressions are the same as those of hubby

Ms. comments hubby.
I had bought nine Pigalle and the candy was trading era Fr 3200 was almost half a minimum wage. But it was well above the competition (which was rare) and was trading at much less than the rack model.
a Rockman if anything, c'tait their pub.
Did you find this review helpful?yesno
»

hubby's review (This content has been automatically translated from French)

Rockman X100
4
So little magic box with the era

a clean, chorus, delay, a crunch and a saturation further.

We had to select sounds pousssant cursors, not very practical, and difficult to live

This box will have a sound on any amp, live, and also the headphone, the ancestor of the consort in whole pod and analog.

It sounded okay, with its unmistakable

By default against a big, you could put any scratches, you had a good crunch and distortion sounds OK clear but still same. It sounded rockman.

Deprecated and is now largely done better with, tech 21, POD XT, tubeman, ToneLab and consort, but for the sound of FM rock of the 80s is the best way to do this.

Rockman X100 manuals and other files