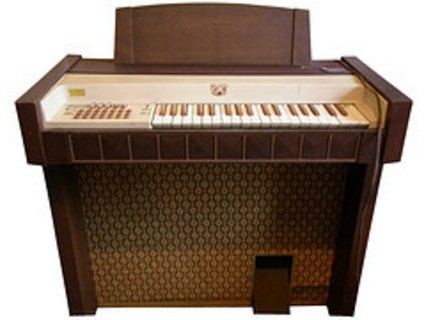 Optigan Stereophonic
5
The Optigan Stereophonic is a unique electronic keyboard instrument that was a precursor to the Orchestron. There are a number of different Optigan models, but the Stereophonic is the one most commonly seen and also goes under the model number Optigan 35002. The Optigans in general are unique instruments because they require the use of outside discs to give it it's different sounds. The keyboard itself spans about three octaves and there is a control panel on the left hand side that also features chord buttons for each note possible and major, minor, and diminished chords. It also has tempo and volume controls. You would probably compare this to the Mellotron, although they are different technologies it's more or less the same idea. The Optigan hasn't held up as well over time however, as the sounds in general are pretty dated to the 1970's. It will depend on what discs you have for this, which is cool because you can get all sorts of different sounds and patterns out there. The downside is that you don't get it all unless you have different discs. I don't know what the availability of these discs is or how expensive or cheap they might be either. The B room at the studio that I work at has this in it, but I'm not really sure which discs they have it in or if they even have extras. While this is definitely a cool instrument to have in the studio since it has it's own sound, it's not something that I would personally be seeking out. It's kind of big and while it must have been cooler at the time to have discs for it, now if you don't have many of them it can be more of a hindrance than anything. If you do come across one, it's going to be a lot of fun to play with and you can certainly get some cool sounds with it, I'm just not sure it's going to be worth the hassle of owning one.
Did you find this review helpful?yesno
»

See all 20 photos of Optigan Stereophonic »