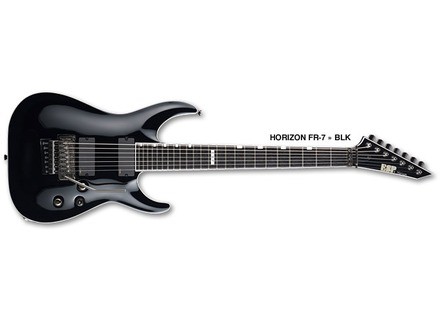 Horizon FR-7, Electric solidbody baritone or 7/8 string guitar from ESP in the Horizon I series.

ESP Horizon FR-7
5
As a seven string player, I've been waiting quite awhile for ESP to finally release a seven string version of their Horizon guitars with a floyd rose. They've made hard tails before, but the floyded one was what I truly wanted. The guitar features an alder body, a maple neck-thru design with an ebony fretboard, 24 extra jumbo frets, offset block inlays with binding, an original floyd rose, two humbuckers, one volume, one tone and a three way switch.

The guitar had some amazing fretwork. You normally don't see this kind of fretwork unless you're working on higher quality guitars. The ends were perfectly beveled, and the frets were absolutely straight, so you could get some real nice action on this. The binding was also done super clean. The inlays work was top notch with very little filler, too. I can't say enough about this guitar. The bridge on this is probably the best non-Ibanez floyd out there, so no issues there. The access to the higher frets was nice, the back of the neck was painted (a bit of a minus), but it wasn't a super thick neck (a plus).

The guitar had EMG 707s installed in it. These can get some very polarizing opinions. Some say that they have a single coil like quality to them, and they kinda do. They have this interesting grind to them that places them, tonally, between the 81 and the 85. There is an EMG 81-7 that you can try, but I don't really recommend it unless you're going for a bright tone. The 707s do a decent job. The cleans are kinda bland, but the rest of the stuff is cool. I recommend trying out the 18v mod if you're looking for some more dynamics. If you're a metal player, you might like the standard 9v that they do.

The guitar is one of my favorite seven string guitars, and I can't say enough about it. I much prefer it to some of my other seven string guitars I own, and I'd put it up against anything, as long as I don't have to play too much lower gain stuff. The pickups in this kinda force it into the whole metal genre, which might not be a good thing for those jazz players out there.