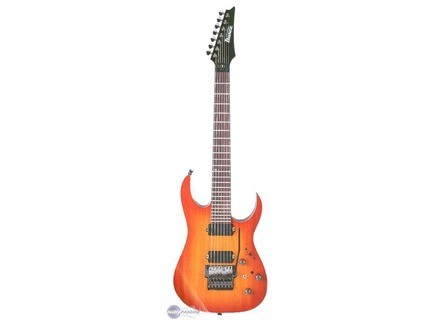 The guitar is very versatile, having 7 strings and an Ibanez edge Floyd Rose licensed bridge with piezos. The neck is very nice, being quite flat but not as thin as some Ibanez ones are (eg. the Wizard -type necks), but that's OK. It probably also contributes, along with the mahogany body, to the very good sustain that the guitar has - the best I've experienced on a Floyd equipped axe. Also the sound is very crisp and full, but not muddy (esp. with replaced pickups).

The 5-way switch allows for a nice amount of tonal variety from the 2 humbucking pickups, and no middle pickup to get in the way of my picking (YMMV).

The original pickups were not really what I was looking for. They were not terrible, but pretty low output and non-descript sounding in general. Thus, out they went and were replaced by DiMarzios; Air Norton 7 in the neck and Tone Zone 7 in the bridge, both of which I'm very happy with.

The piezo electronics were also quite simplistic in the 2001 model, not allowing the magnetic pickups and piezos to be blended. Luckily there is also a rather easy mod that allows more variety.

The lack of neck markings (except for the 12th fret) might turn some people off as well, and it does take a while to get completely used to a plain neck, especially if it's on your first 7-string. But personally I like the look.

No big quality problems or complaints. The biggest qualm is that a few frets (23rd and 17th) seem to be a bit higher than others - bending up from the 16th or 22nd fret with very low action can kill the note. A little fret shave should fix it though, and personally even though I play with low action, I wouldn't want it *that* low anyway.

Very nice guitar, especially considering the price and features. If you're looking for a 7-string with a piezo tremolo bridge, you don't have many choices anyway, it's this one or the Ernie/Ball Music Man Petrucci model, which costs about twice as much as the Ibanez.

Ibanez RG2027X
5
The RG-2027X was a limited production RG 7 string. It's similar to the RG-7620, but this guitar features a mahogany body and a piezo Lo Pro Edge. These two things make this probably one of the more coveted 7 strings on the market with only the RG7CST topping it. The guitar features an HH setup with a 5 way switch, volume knob, tone knob, volume for the piezo and switch to select between the magnetic/piezo options.

Ibanez makes some of the best seven string guitars in the world, and this is no exception. The neck on this thing is absolutely glorious, and the weight of the guitar is perfect. If you've never tried a seven string guitar before, I highly recommend testing out an Ibanez as they tend to feel more "natural" than some other guitar manufacturers out there.

This is one of my favorite sounding RGs ever made. The mahogany body combined with the maple neck and rosewood fretboard gives this thing an absolutely awesome sound. The low mids on this thing really sing, and it has a nice bite to it that basswood doesn't always deliver. The piezo sounds very full sounding, unlike certain other brands out there. The stock pickups are pretty dull, but they're easy to replace.

If you're in the market for a higher quality RG 7 string, this is one of the models you should be searching for. They can be a bit hard to find, but if you see one, you should really consider grabbing it. Ibanez rarely makes mahogany bodied RG 7 strings, and this is one of the best 7s Ibanez has ever made in the standard production line. About the only thing that exceeds it would be something in the J-Custom line.

neumann08's review (This content has been automatically translated from French)

Ibanez RG2027X
5
So this was a very pretty scratched a 7-string. I have about 3 years now, and frankly, a marvel c. The neck is really very enjoyable, but not fine enough as a sword, and more comfortable than other 7-string Ibanez RG models. There is no frieze, nickel pitch. Does not dsacorde, floyd fatal. I have over two DiMarzio Evolution, and a selector which allows for the center position both pickups in single, unlike the original version or this position is two microphones in duplicate. It also possde pizo sensors for acoustic sound impressive, but still a little typ. In short, the trs trs good stuff, so good .....
I'm not 10, because I tried the 7-string Vigier Excalibur, and the handle is even better size ... a little killing, but more expensive and less beautiful for my taste.

karadoc26's review (This content has been automatically translated from French)

Ibanez RG2027X
5
This is a great 7-string guitar with a body and a mahogany table and a maple neck with rosewood fingerboard trs beautiful. It has unfortunately not much t Distibution in France, since it has t made in Japan for one year only (2000).
It possde 24 frets on the clock, mine is mounted in the Tone Zone 7 micro acute and Air Norton 7 in the grave.
The floyd is a pro edge and is equipped with a piezo sensor that works really well!
The neck is thin enough, and going from a 6-string guitar, this one no problem, and it is in part justified my choice.

So as I said above, the handle is really enjoyable, in the spirit of what is usually Ibanez is to say relatively thin sleeves and fast.
CHAC is to treble it easier not to heel by the profile and it's really a plus.
The guitar is forcment a little heavier than a 6 string but not more than a Les Paul, then a reasonable rest of this trs ct l. .. no worries.

With regard to the sound, I think it's the 7-string Ibanez's most versatile out there, with seven swords (but who are also almost impossible to find).
For big sound, it's all good: the sound is standard, although Dfine, whistling harmonics alone, it's really a pleasure for the mtal!
In Jazz, it is the case as well trs, trs microphone serious is hot, and we can spend a little more vintage sound.
For the blues, as a password, but I really have AIM a single coil as in Vigier Excalibur 7-string ... that's why I put that 9 point of view of sound as it would really be able to perfect in all styles. (I also used to play The variety in accompaniment).
The piezo, as it plays out its rev rle, and scne, it can really mislead is unlike what I thought at beginners, far from being a gadget ! (Against damage that can not shuffled magntiques mics with this one. But it's a dtail).

I use it for almost a year now, it's become my main guitar thanks its great versatility, unusual for a 7-string!
I have never regretted buying this guitar, and until today I've never jou a 7-string mesh. (It lacks a floyd on my Vigier got!)