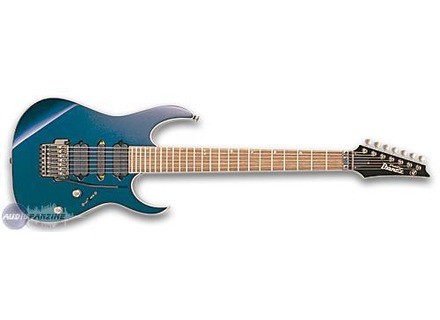 Ibanez RG2077XL
5
The RG-2077XL is a seven string model that Ibanez created for those who like the extended scale guitars that other companies have offered. One problem some people have when downing seven string guitars is that the tension is always loose, despite using heavy gauge strings. This guitar helps fix that with the longer 27'' scale. Besides the extended scale and middle single coil pickup, this guitar is pretty much the exact same as the RG-1527. The only differences would be the offset inlays and binding on the body.

The extended scale really helps when you're tuning down to something like A or lower. It also gives it a bit more "snap" than the other Ibanez guitars out there. As always, the higher fret access is absolutely wonderful thanks to the extended cutaway in the lower horn and the All Access Neck Joint. The middle pickup is also a nice addition for those who are wanting some single coil action in their seven string guitars. If you've never played a 27'' guitar, it shouldn't be too hard to get used to. The difference in scale length is somewhat like going from a Gibson to a Fender.

The pickups in this are pretty much the same as the New 7s that other Ibanez guitars have offered. I'm pretty sure they're just renamed. Because of that, you'll probably want to replace them. Unfortunately, there aren't many single coil seven string pickups out there, so you'll probably have to either keep the middle pickup stock or get a Blaze single. That aside, once you replace the pickups, the guitar sounds great, and the added "snap" thanks to the extended scale offers a very nice bite in rhythm tones, as well as clarity in the lead tones.

If you're looking for an extended scale seven string Ibanez, this is one of the few options you have. They're pretty rare in the US market, but I see them pop up from time to time in the European market for whatever reason. It's a very solid guitar, and if you're an Ibanez seven string fan, they're definitely worth looking into.
Did you find this review helpful?yesno
»

Stigmates's review (This content has been automatically translated from French)

Ibanez RG2077XL
5
7-string guitar like guitar K7 Korn, but without the vibrato U CHARACTERISTICS this group.
Imports from Italy since the plant was closed Franaise.
MODEL prestige, it will be a flying box of the same MODEL to bring ...

Small problem, the strings ptaient always at the same place, namely between the rope and the vibrato on, do the little things yet rounded, a little rglage and presto, no more worries.

Just as the very first time I tried it I felt that there was butter on the handle so I galloped. Normal before I had a Cort Stellar. It was "almost" feel of being Joe Satriani with this kind of guitar, so the quality comfort of play and finish are put forward. I have incredible progress thanks this guitar, both technically, the effects of research styles or sounds.

Even without multi-effect: the sound is just fine.

Small dsavantage even when it is a little heavy.

The main problem as a factory, it is a tone lower RULES (A, D, etc.) and if you want rgler in SI must be the Fully hack of the curve of the handle spring tension.

Another thing, the handle and large hyper but hey, tell me: but that's normal of c **! And I will tell you, yes, yes, but of course, but you still even talk about default also so here goes ...

I'm in a metal band, which should rev out this guitar, I play on DIFFERENT types of amps in the studio since we rptons. On huge lamp, a torch, lamp adboite Laney Laney and even on a keyboard tumbling. On marshall combo, and adchire Peavy is average, normal, it means Peavy, he he he ... (NDLA).

We can all get with this guitar or almost: distorted sounds of rough, clear, erupting, electrified, soaring, clear, and so on ... foudroillant
I shut trs surprised to hear the great diversity of sound that can produce 20 RG XL's clear is also here that is most impressive. Sounds of U2, Korn, RATM, Pink Floyd, Filed of the Nephilim, for the most modern but also sounds more bluesy color, but not too much even.

Basically this guitar is beautiful to see the same metal and start removing oeillre THE FIRST ... As it would therefore can not agree all styles (vintage sounds, pure funk, etc.).

I possde prs guitar for this one year, the dark blue straw with white lines around the neck and body made me crack. Depending of where you look at it, the shades range from dark "Gothic" in blue glitter, "disco stu and still alive."

I tried a Stratocaster, a tlcaster a musicman and Samwick before choosing this skyscraper.
Qualitprix a will, it is great finishes and impeccable sound and we can not blame Ibanez if tui book without and it costs over 900.
Did you find this review helpful?yesno
»