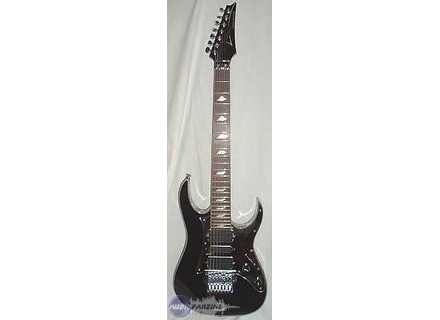 Ibanez UV777
5
I got this guitar in Japan after my local guitar shop told me I'd be waiting at least a year and a half for them to get it in, I paid a bargain 1200 Euro for it.

This guitar is one of the most awesome guitars I've ever played on. The tone it produces is just amazing I mean comon if it's good enough for Vai it's good enough for anyone. The guitar has a lo pro edge 7 bridge which is one of the smoothest bridges to play on. The pickups are absolutley amazing they have Dimarzio blaze 7 which are just amazing and it also has a single coil it can produce a variety of sounds everything from funk to metal to prog. It's made of American basswood which sustains sooo well..... and the Rosewood neck on the guitar is extremely easy to play on it also has abalone disappearing pyraids on the neck.

The construction is absolutley amazing it's an Ibanez Prestige after all and the fixtures and binding are rock solid.
The inlays are laid perfectly as well as the bridge height and pickups.
And the delux Gotoh tuners

If you want an awesome guitar and can afford it get this guitar. It's amazing.

6 years
Yes, I just ordered a Vigier Excalibur supra HSH 7
We can all play, vibrato is excellent, the pickups are amazing, even with acoustic rglage.
The report quality price is right trs
Without a doubt, I do not spare