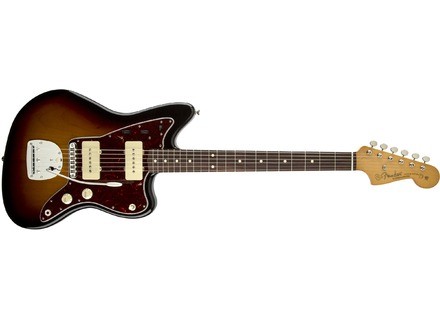 Jérémy Guézennec's review (This content has been automatically translated from French)" Yes!"

Fender Classic Player Jazzmaster Special
4
I bought this Fender Jazzmaster there a year by hand in Lyon in someone who obviously does not address the best way ... a setting later, it sounded amazing! I have long wanted a guitar for my Gretsch G5248 following too rigid and its too fat. Jazz has become: versatile and impressive, which is not particularly lacking in personality. The original pickups are really good, especially the medium that provides real-typed his Fender Stratocaster recalling in particular. The neck is perfect, it never goes out of tune (it's awesome).
Quite heavy, I had problems at the belt, but it also had his old dad: I'll opt for straps and locks this is resolved.
The price / quality ratio is pretty good, insofar as one can acquire a great guitar for less than 1000 €. I do not really see what the real difference between and significantly worth of guitars in 2000 or even 3000. A Southwestern which has nothing to envy to the U.S.. Its look is super original while avoiding being extravagant or vintage-on price, handles are surprisingly balanced and tortoise pickguard ... mioum.
Pros: sound, great playability with a slight pull, the quality for the price, no need to re-tune every two minutes.
The -: the bridge just a bit ... the "rhythm" mode when switche micro switches and knobs that top concretely obsolete but hey, it does not bother either does one tell. And. .. that is all.
I believe that even in 15 years, I repeat the same. Perfect for playing garage, great for typing in the psyche, it also keeps a clear sound Fender well known and often praised. This is no exception to the rule!

For specifications, everything has been said.

In my case it was a buying opportunity: For a while I was looking for a girlfriend to my Gibby SG, which is as complementary as possible. I was away on a telecaster, but knowing the character very (too?) Over the latter, I watched what was happening in other fender, outside of the stratovolcano (great guitar, but I do not know I can not ... too .. too saw it?).

It is by chance that I turned on this guitar.

To summarize, this guitar has it:
> Look fabulous (it's a detail ... but that counts right?)
> I found a violin quality (although I still would rather assemblies "tenon - mortise gibson fender with large screws ...)
> A hardware ranging from not bad (the mechanics are really good vintage ... simply resize the nut eventually) to very good: the pseudo tune-o-matic associated with good vibrato is always a pleasure, even if I found that the tail of vibrato seems a bit off in its housing. Holding agreement has positively surprised me.
> Microphones and sound of hell ... The pickups have a grain (especially the serious ... I like the treble but the bass ... yum) excellent, and a very wide range. The light is beautiful, ranging from very dry and slamming Fender to something more velvety via the band selector. Crunches are falling, and, best of all: the beast behaves very well in distortion. On sound distortion is independent Queen (at the same time it is known for that), but she does not mind going to sound more dug.
> The routing between combinations of mics is pretty clear ... It's not a Jaguar HH

If we were to find fault:
> It is bulky! The body is really great
> It is heavy ... Not as much as a Les Paul, but much more than a SG!
> Setting the microphones (one plot per cord in addition to the pickup height) is not obvious at first

Anyway ... The position of guitar No. 2 is a difficult job because I'm pretty quick to resale ... But I do believe that one party is to stay permanently!

sienar's review (This content has been automatically translated from French)" Great"

Fender Classic Player Jazzmaster Special
5
One month I play on it and it's a real treat!
I absolutely wanted a U.S. but after trying both, the price difference is justified clearly not! (Although a jazzmaster us will be mine one day or another!). So I tried one U.S., one Japanese, one telecaster us, and a gibson.

The peculiarity of this guitar is what is really the sound ... I speak for jazzmaster in general. It is halfway between the glitz of a Strat and a heat lespaul.
Comfort level then it is clearly established.
With experience I will ever clear that choice in this price range!

Mr Torò's review (This content has been automatically translated from French)" Good!"

Fender Classic Player Jazzmaster Special
4
How long have you use it?
2 months

Have you tried many other models before buying it?
A real Jazzmaster to 2000 €

What is so special that you love the most, least?
The sound of the Jazzmaster, lightweight, comfortable handle, the vibrato.
But the feedback comes quickly with the bridge pickup.


How would you rate the quality / price?
€ 640 bought in the United States, but the French state takes you a fee over € 169 ... (Watch) Excellent value for money


With experience, you do again this choice?
Yes, I wanted a jazz, I had a jazz

Did you find this review helpful?yesno
»
Read the 10 user reviews on the Fender Classic Player Jazzmaster Special »

Published on 07/21/10
To celebrate the summer, Fender is giving away a Classic Player Jazzmaster Special guitar.