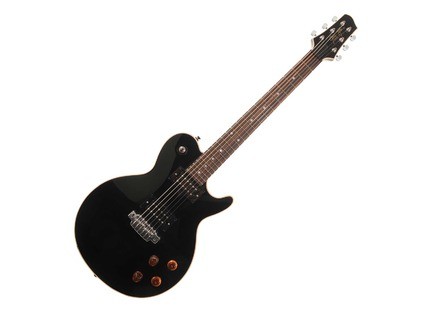 Line 6 JTV-59
1
I am an owner of a Line 6 Varix 500, which I have owned for six years, have been pleased with the guitar! however I read how much better the Line 6 JTV69S were in comparison with the old Line 6 Guitars! so I purchased a new Line 6 JTV69S; what a disappointment! I had previously read people stating that the playability of the new Line 6 JTV guitars were far superior to the old Line 6 guitars! and the quality was far better, also stated the neck on the new JTV were of a far better quality than the crap Variax500!

What a shock I have had with the purchase of a new Line 6 JTV69S! I was really looking forward to this new guitar, and the improvements! however when I tested my new JTV69S; I found the action far to high! when I tried to lower the action, I had terrible string buzz from the fretboard! I then made adjustments, but found the neck flat, and I then realised that the fret buzz was due to poor fretting! so could not adjust!! really dissapointed, the action was higher than on my Variax500!!! then tested the sounds of the new JTV69S, found most were the same as my Variax500! however some of my most used sounds of my old Variax had been changed, and the replacement sounds were not usable!! also the quality of the timbre of the sounds were not as good as my Variax500! my wife commented whilst I was testing the guitar that the sounds sounded tinny and unnatural! then I played my old Variax, and we both looked at each other and agreed my old Variax had a far more realistic sound!to make it worse! on the new Line 6 JTV69S there was an issue with strings G & E intermittently losing sound; which would last up to almost 5 minutes, and would only come back to work after extensive strumming of the strings! which really shocked me as I had read that the had been improvement in the quality of the JTV69S build! sent guitar back to supplier! total rubbish! does not feel like a quality guitar! much lighter in weight than I expected!
Did you find this review helpful?yesno
»

Line 6 JTV-59
4
This is the US build Variax. It has 2 hum buckers by Seymour Duncon, the piezo for the Variax guts, volume, tone, and the Variax selector to switch models, and select alternate tunings. As well as a les paul type toggle switch. It also has a network jack output to to go to the Variax "hockey pick adapter to go into your computer via USB to use the Line 6 work bench to edit settings or into a Pod HD for connecting in the digital domain.
It has a wrap around Les Paul Jr. type bridge.

It's a very nicely made, well playing guitar. Fret access is good, especially forLes Paul type single-cut body shape.
The USB settings/computer connect ability depending on your PC or Mac can be a bit daunting at times. But as of know those drivers seem stable.

Sounds...first off, the magnetic pick-ups sound actually pretty awesome. they're a bit hot for my taste. But no more so than say in a les Paul Classic.
It has less midrange honk than a Les Paul. Now lets take a look at the Variax sounds. The stand outs for me are the Les paul, Les Paul Special and Firebird. The Gretsch' are very nice. The 335 is a bit too honky and dull. The Start with gain is glorious, the in-between settings could stand a bit more "quack". The acoustics need some careful balancing of the tone knob which then becomes a moving the mic between sound hole and finger board virtual placement.
The sitar is one of my have off the wall things in it.
The 12 strings at the default setting sound a bit too processed, but rolling down the tone helps. In this case it determines how much octave string you have in the signal.
All and all its a great palette at your disposal. The common complaint about "dinginess" to the attack on palm mutes isn't an issue if you lighten your right hand and move it a tad back.

The tunings is where th fun starts. Want open strings in a solo but the tune is in F minor? Just set the tuning to up a half step and play in E. Need drop D and Drop C# in the same set but don't want to carry extra guitars? there you go it's in there. And my have the baritone tuning and low B tuning. Sweet on a Tele.
I'm glad I got this guitar.

I'm playing guitar for 40 years and I `ve had a lot of guitars (Gibson, Fender, Ibanez, Godin, etc.) in my possession.Je must admit that this guitar that line6 has placed on the market is surprising, according to the concept, playing with a variety of guitar of any brand and `tuning .. Any guitarist wants to hold this kind of produit.On want all possess a Gibson, Fender, Rickenbacker, acoustic guitars, 12-string guitars, alternate tunings` etc., but we don `t have all the budget for all of these instruments ...

The love that I have about this guitar is its ability to change polyvalence.Le models of guitars and tuning in no time, very nice. The sounds are very respectful of the original guitars (you must remain honest, you don `t have a Gibson $ 3,000 in the hands, but it` s good anyway) ... especially in acoustic mode (j `I was very surprised reproduction quality 12-string guitars .... Bluffing) .. The quality of the wood is very good, except for a failure to look at the `bending .... The humbuckers are well their travails ..

Now, the negatives ... I found that really étaients frets too big, a little hard to doigts.J `would have liked a little more freight for ... L` e did not work I bien.Lorsque positioning itself the string function 12, there was a clang on the rope RE really unmanageable and at the same time the rope sounded wrong (not a little, but around one tone below tone) ... Problem `s electronic and non- key ..

The quality / taken ratio is attractive because this guitar can do a lot, but the quality level of the `e is a total mess ...

I am not here to harm line6, puique j `ve amplifier (DT25) of the same brand and I` am very satisfied, but the guitar that he offers is really a disappointing product level and electronics. ..

All I want to say, be careful with this kind of electronic guitar `s surely not have a very long life ... A guitar that sells $ 1,600 Canadian and will give, perhaps, signs of problems in subsequent years, and that person (luthier) can not be repaired is too expensive ...

If you want to risk it `s such a purchase and you have the means, go ahead because the sounds are really interresting, but how long you can use it?????

Now my choice of guitar going to focus on conventional guitars ... not complicated, with a lifetime long-term and very respectable resale value and trouble ..........

With `experience, I would not choose this guitar ... I let him take the game` s have 25 guitars in one, but I found that the product is very disappointing .... You can find me be a little harsh, but for a guitar of this price, I `m waiting to have some performance .... Is that I have been unlucky with my purchase? be little, but I'll let you judge .......

9 of 17 people found this review helpful

Delenda's review (This content has been automatically translated from French)" not bad .."

Line 6 JTV-59
4
Almost 2 years, intermittently
Yes and no (other guitars yes, other guitars not modeling)
+: Violin quite nice, easy to play (* I'm starting bassist ...) Its out very correct modeling (she has her own microphone) And in fact all sounds very correct.Banjo super funny... ..
- 12-string sounds in particular (you can do the same thing with a plug-in), the acoustic sound in general. but hey, at the base, it's complicated to make an electric sound like an acoustic, even paradoxical. Having said that these sounds are rather interesting at the same time, do not just expect to hear a 12c "live" .. Rather a pre-recorded and pre-mixéee 12c, with more or less success.
Price / quality: good, because regardless of modeling, you have a good guitar anyway (although heavy as bass) (see *)
Repeat this choice? Yeah anyway. Apart from the acoustic sounds disappointing, the rest is pretty good. Do not expect the sound of the original guitar (for the little I know of the original), but it is still a very decent range of real sounds, and many musicians should get something nice.

Did you find this review helpful?yesno
»
Read the 5 user reviews on the Line 6 JTV-59 »