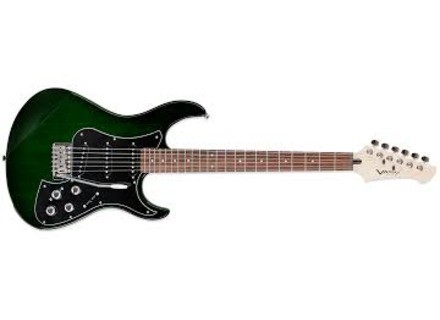 poulacourve's review"Variax Standard Sunburst : good value-for-money, but as for its accessories..."

Line 6 Variax Standard
4
It took a while before I finally leave a review on this axe, so here we go… As a previous Variax 600 owner who needed new strings, I went to my local dealer where I met a Yamaha salesman who was telling the dealer about the new Line 6 products he intended to sell him.
A quick chat with the salesperson, an order by the shopkeeper and 3 weeks later…

Specs:
(as they appear on a famous German-based reseller's website):

I was called on the very day the guitar arrived (it hadn’t even been unpacked yet).
So I unpacked it just before trying it – I’m the very first to have touched it :mrgreen:
The guitar was very well and solidly packed within various layers of plastic, foam… But no gigbag or softcase! A bad surprise, I would have gladly spent 30 or 40 more bucks for a proprietary softcase (even though, between you and I, they could give it… Goddamn!).

So the pack includes the following: the guitar (obviously!), a (very) basic 5ft rj45 cable, the workbench box in a very purified style compared with the previous one which had a very short USB cable, the battery and its dedicated charger, the paper manual (which no longer features a reinforced cover), 2 hex keys and this is it… Quite minimalistic, almost low-cost compared with my Variax 600.

As for the guitar:
Visually, it’s a sort of mix between a Variax James T (for its neck, tuners and knobs) and a Yamaha Pacifica for its body shape, color and varnish. An entry-to-mid range guitar.

Its building quality is flawless !

The different knobs are in chromed metal with LEDs to signal changes in the models/tuning. The tuners are beautiful and shiny!

However, I had to change the strings within two days – those that came with it were plain crap! They were too rigid for bends (I’d say they were 9 or 10/42s) and sounded very metallish. As for acoustic sounds, it was slightly better… But once D’Addario 9/46 put on, it was way better!!

The guitar is particularly light (again compared with the Variax 600), no string buzz problem and the neck’s varnish is very thin with a matte aspect (it slides). Action is set quite low, not as good as my Ibanez JS1200 but it’s a real highway if you compare it to a Strat-like-necked Variax 600!
The guitar stays very well in tune, even when using the vibrato a little (yes, I said “a little”!) – it’s not bad at all in that regard.

The guitar is plugged with its original pickups into a Mesa Boogie Studio Caliber amp and/or a Pod HD.
The three single-coil, AlNiCo pickups have a very typical Strat sound to my taste, anyway it’s a very good guitar.
Clean sounds range from crispy to crystal-clear, and crunch to distortion.
Really nice for funk, blues, rock and a bit of hard rock!

As for metal and beyond, you’ll have to press the button and activate the guitar’s modelling capacities!
Modeling activation:
The guitar is transformed!
The emulated guitar sounds are recognizable (as to how close they sound to the originals I have no idea nor do I care, all I know is they’re all useable), and much more subtle (less of a caricature than my old Variax, at least I find them better).
The battery allows to play for 10 to 12 hours, with green DELs at the back of the instrument showing how loaded it is. I personally plug the guitar into the Variax in of the Pod HD500 (with my previous Workbench’s RJ45 which was longer and sturdier) and it’s great!

While we’re on the Pod HD500, just one thing I want to mention: the Strat, Tele or Gibson emulations are much better when used with the Pod HD500, not that they’re bad without it but it brings a real difference regarding its sustain, slappy sounds… a real enhancement.
The 12-string guitar sounds as wall as other acoustic guitar sounds have been made better to my taste… But the axe’s real pro is its 11 tuning settings for each modelled guitar! Let alone those you can create using the Workbench and save as presets in the guitar’s custom banks…
A real pleasure to play in A440, then switch to a semitone lower, then in open G, dropped D – even in baritone!!

To avoid hearing the strings (which of course remain in A440), you’ll have to set the amp slightly louder – don’t worry, I said “slightly”, just enough to cover the sound of the strings.

Soundwise, the Workbench HD allows for the craziest mixes and really makes the models better as everyone can make his own – provided you’re ready to spend a little time on it it’s a good thing.

Originally i wanted a sunburst Variax JVT 69, but at 900 to 1200 bucks and no way to try it where I leave I didn’t feel like it…
While for 649€, I could get this Variax Standard AND an opportunity to give it a try beforehand…
I sold my Variax 600 with a little nostalgia but no regret, so yes I’m satisfied with my Variax Standard!

It’s a nice guitar with its pickups, and a great modeling guitar !
The reason why I gave it 4 stars instead of 5 is I find the included accessories to be a little too light, such as the very short and basic rj45 cable (it looks like an Ethernet cable), the manual that looks like one of those cheap ones you get with ready-to-assemble Swedish furniture (Ikea, you name it). Plus, no bag or softcase is included! I’m (not) sorrybut I feel compelled to insist on that point, as this detail shocks me enough to repeat it again and again...

Published on 01/24/15
We went to see at NAMM the result of the first collaboration between Line 6 and Yamaha on a Variax modeling electric guitar. Here we go…

Listen to the 26 audio files about Line 6 Variax Standard »